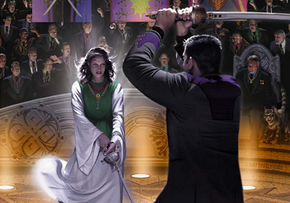 Fitzclarence was an extreme conservative opposed to Protector Benjamin IX's reforms, and an open enemy of fellow steadholder Honor Harrington, who in his opinion had no right to hold the office because she was a woman and a foreigner. After his ally, Brother Marchant, was banned by the Sacristy, he refused to allow the new minister to take his place and restored Marchant. He then conspired with Steadholder Mueller to sabotage the Grayson Sky Domes, Ltd. project in Mueller Steading to discredit Steadholder Harrington. The resulting collapse of the dome covering Winston Mueller Middle School caused the death of eighty-two people, including thirty children.

When it became obvious that the sabotage could be proved, he attempted to assassinate Harrington by having her pinnace shot down. However, his assassin Edward Martin, a retired Burdette armsman, accidentally killed the Reverend Julius Hanks instead. Fearing for his immortal soul, Martin gave a full confession in the presence of the Second Elder and the Protector.

Privately, Lord Mueller reflected that his ally's unshakable faith made him easy to manipulate, especially since Burdette was blinded to the potential power that their actions against the Protector might bring; on the other hand, Burdette trusted too much to divine providence to save him from his own poor planning and hasty decisions. Mueller particularly decried Burdette's ill-conceived attempt to assassinate Harrington the act of an "idiot."

When Lady Harrington named Lord Burdette as the responsible party in the Conclave of Steadholders a short time later, he proudly admitted to his actions and chose to challenge the Protector's Champion to single combat. As a Swordmaster Second (according to Mueller, Fitzclarence was one of the fifty best fencers on the entire planet), he assumed it would be easy to kill Harrington, in which case he would have gone free according to ancient law. However, his experience in the fencing salle proved to be utterly useless against Harrington, who was an experienced fighter and had already received training in Grayson sword forms. He was stupefied when she slashed him from right hip to left shoulder, and unable to riposte or defend himself before she beheaded him. (HH5)

One of his cousins, Nathan Fitzclarence, inherited the Burdette Key after his death. (HHA6.5: OS)