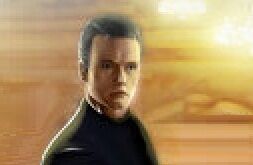 Victor Cachat[1] was a Havenite citizen and an outstanding agent first of the StateSec and later of the FIA and FIS.

At 24, he had coarse black hair, wide, shallow brow, and black eyes, with ascetic-pale, hard-jawed, tight-lipped, square-chinned and gaunt-cheeked face. He had a slim, wiry build and square, muscular shoulders. (HHA4.5: F)

Cachat was born in the Dolist slums of Nouveau Paris; during his youth he became a zealous supporter of Rob S. Pierre's and Oscar Saint-Just's revolution, following their seizure of power and believing that the Committee of Public Safety would eradicate all forms of elitism in the Republic. Once he was old enough, he entered the StateSec Academy to become a security officer. He graduated third in his class, gaining a reputation for ruthlessness and efficiency which caught the eye of Saint-Just himself. (HHA4.5: F)

Cachat was stationed in the Solarian League’s capital of Chicago on Earth in 1914 PD. He discovered his superior was planning to allow Manpower Unlimited access to Havenite space in return for their assistance in eliminating two high-ranking survivors of the previous Havenite government. Since genetic slavery was the absolute antithesis of the Committee of Public Safety's official party line, Cachat was deeply shocked and disturbed. In response he contacted the head of the embassy's marine detachment, Kevin Usher, a disenchanted Aprilist turned People's Marine, who opened his eyes to the wider corruption and brutality of the new regime.

Together they moved to thwart the plot, which included the kidnapping of Helen Zilwicki. Cachat was involved in the final rescue of the girl, during which he brutally massacred among others a large group of Scrags working for Manpower and helping Captain Anton Zilwicki of the Royal Manticoran Navy to find his daughter. What followed became known as the "Manpower Incident", in which Manpower's offices on Earth were destroyed and a Manpower Unlimited strike force was entirely wiped out when attacking the Havenite embassy. (HHA3.3: FtH)

Subsequently Cachat joined the opposition but was actually promoted in the aftermath of the Manpower Incident because the version of events that reached StateSec portrayed Victor's actions as ruthlessly and effectively cleaning up after his superiors' incompetence rather than being the agent of his superiors' failure.

His apparent willingness to eliminate even fellow StateSec officers while in the service of the republic led to his appointment as a Special Investigator for the Director and being sent to the La Martine Sector to investigate the death of People's Commissioner Robert Jamka. (HHA4.5: F)

After the restoration of the Republic, Cachat was assigned as Special Agent to the Federal Investigation Agency (FIA).

In 1920 PD he was sent to Erewhon to accompany Virginia Usher as the unofficial Havenite delegation to the Stein funeral. He assisted in the taking over of the planet Congo by former genetic slaves, and began a relationship with Solarian Marine officer Thandi Palane.

Following his participation in the establishment of the Kingdom of Torch, Cachat was transferred to the Foreign Intelligence Service (FIS), and assigned to the Maya Sector. (CS1)

During the events following the attempted assassination of Queen Berry I of Torch, Cachat travelled incognito with Anton Zilwicki to meet Admiral Honor Harrington. During this meeting he revealed himself to be the Foreign Intelligence Service (FIS) station chief for the area including Erewhon, the Kingdom of Torch, and the Maya Sector. He claimed that the Republic of Haven could not have been behind the assassination attempt. (HH11)

Cachat and Zilwicki then went to Mesa and started a covert investigation of Manpower. Cachat was thought by the Mesan Alignment to have died in the explosion at Buenaventura Tower. (CS2)

In reality, Cachat was alive and well. He and Zilwicki travelled to Haven with Dr. Herlander Simões, a Mesan defector who later testified about the existence of the Mesan Alignment and its involvement in the Yawata Strike. This information was then shared with Empress Elizabeth of Manticore, leading to the end of the Second Havenite-Manticoran War. (HH12)

Cachat and Zilwicki then returned to Mesa to continue their investigations. Along with Thandi Palane, Cachat established contact with seccy crime boss Jurgen Dusek. When the Mesan government began a violent crackdown on seccy communities after Operation Houdini, Cachat and Palane worked with Dusek on the defense of Neue Rostock while Zilwicki attempted to seek help from the Star Empire of Manticore. (CS3)

Rescued from most likely certain death by the arrival of Tenth Fleet of the Royal Manticoran Navy and Second Fleet of the Republic of Haven Navy, Cachat and Palane was reunited with Zilwicki aboard HMS Artemis when he, Damien Harahap, and Indiana Graham arrived in the Mesa System aboard HMS Tristram. He, Zilwicki, Harahap, and Graham later planned to return to the surface of Mesa to pursue possible additional clues to the existence and whereabouts of the Mesan Alignment. (HH14)