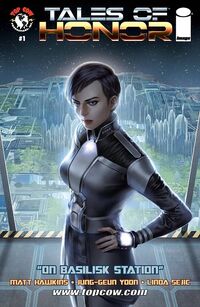 Tales of Honor is a series of graphic novels based on David Weber's Honorverse novels and released as part of the multimedia story world of the same name.

It is written by Matt Hawkins and drawn by Korean artists Jung-Geun Yoon and Sang-Il Jeong.

The series retells the events of the Honorverse novels through a somewhat nonlinear framing device: the first issue begins with Commodore Honor Harrington being held as a prisoner of war by Havenite Secretary of Public Information Cordelia Ransom (as originally described in the seventh main series novel, In Enemy Hands). Tortured and isolated, she begins to recall the events that led her here, beginning with her mission on Basilisk Station.

Retrieved from "https://honorverse.fandom.com/wiki/Tales_of_Honor_(comic_series)?oldid=74106"
Community content is available under CC-BY-SA unless otherwise noted.