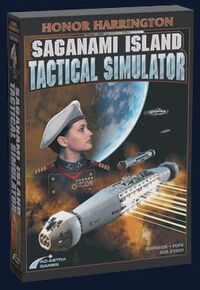 The Saganami Island Tactical Simulator (SITS) is a tabletop wargame set in the Honorverse, currently in its second edition. The first edition was based on the Attack Vector: Tactical game engine, whereas the second edition featured a rewrite of those rules. Originally published in 2005 by Ad Astra Games, the second edition was published in 2007, and is based on the Squadron Strike movement engine, which uses whole turn pre-plotted movement, rather than segmented movement and time keeping.

The game was developed in concert with David Weber and is considered "soft canon" to the universe. The game is described, in an in-universe introduction in the rules pamphlet, as an aid issued to Royal Manticoran Navy cadets at the RMN's Saganami Island Academy and used by cadets to prepare for the more complex and time-consuming computerized simulators, as well as by line officers on active-duty starships to war games, in the military sense, various scenarios before engaging in the process of programming the ship's simulator.

The SITS 2nd Edition game scale has one map-printed hexagon at 240,000 km, and one turn as the equivalent of 6 minutes in the universe of the game. A thrust scale of 1 is 190 Gs, and ships (as of the release of Second Edition) range in thrust from a scale of 1 to 4; however, the play aids can handle ships with thrusts of up to 7. There are sidebars throughout the rulebook explaining when the game breaks away from the numbers used in the novels, and why those decisions were made. (The first edition game hewed much closer to the numbers given in the books, but did not capture the feel of combat in the books as well.[1])

The turn sequence has players plotting ship movement by use of grease pencils or eraseable markers on laminated cards; all movements are plotted simultaneously, as are all fire decisions. Orientation on the map is shown with box miniatures and tilt blocks, with altitude shown by stacking tiles.

The game play focuses on single ship or small unit engagements, as shown in the earlier books in the series. The primary armament is the impeller drive missile using bomb-pumped X-ray laser warheads, and where shoals of missiles are launched at enemy vessels, to be whittled down by the defenses of the target (abstracted as electronic countermeasures, countermissiles, and point defense laser clusters).

The mechanism for "culling the missiles" abstracts down to three die rolls (one for ECM, one for countermissiles, one for point defense lasers), each one knocking out missiles on their way in; ECM knocks out out a percentage of missiles, counter missiles and point defense tell you how many inbounds you shot down.

Whatever makes it past the three layers of defense hits the ship, where a system takes warhead size, target size factor, sidewall strength and a die roll to determine how much damage the missile does. A typical example would be a scale 7 missile (annotated as 7M) hitting a scale 5 target with a sidewall worth -3; the die roll is two 10 sided dice, subtracting the smaller number from the larger (annotated as 2d10-), giving a range from 0 to 9.

Each missile that hits has its entry point rolled on a hit location matrix that has the port and starboard sides of the ship on the top and bottom and fore and aft on the left and right sides. Each damage point moves down the row or column of the matrix, identifying what gets hit; the system is marked on the system damage tracks and combat resumes.

SITS features several game aids, some developed from Attack Vector: Tactical. First among these is the Attitude/Vector Information Display, or AVID. The AVID is designed to provide a visible reference for each ship's current attitude, planned attitude changes, as well as current velocity in three-dimensional space. In combination with the Range/Angle Lookup Table (RALT) (a chart that runs out the Pythagorean Theorem, color coding angles of fire to match the color coded rings of the AVID), doing the spherical trigonometry implicit in a three-dimensional combat environment is greatly simplified.

To simulate 3-dimensional space using a 2-dimensional map, box miniatures (card-stock paper cubes, shipped in sheets with pre-printed ship graphics) are placed on the map, using tilt blocks and stacking tiles to simulate angle and altitude, respectively. Tilt blocks are plastic cubes with wedges cut into them, at angles of 30 degrees for one cut and 60 degrees for the other. This allows any combination of 30 or 60 degree increments in ship flight dynamics—pitch, yaw, and roll—to be depicted using one or two tilt blocks. (Yaw is represented by turning the whole stack of box miniatures, tilt block(s), and any stacking tiles.) Stacking tiles are colored plastic tiles, designed to fit into the bottom of tilt blocks, with different colors representing different numerical values above or below the surface of the map sheet. Signifying altitude "below" a map sheet is done by adding a single black tile to the top of the stack. 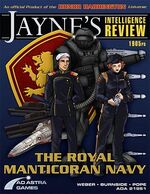 The license under which Saganami Island Tactical Simulator was created has also allowed Ad Astra Games to produce the Jayne's Intelligence Review series of books, which add further depth and detail to the Honorverse. These books are also vetted by David Weber, and are also considered Honorverse "soft canon." The concept of the Jayne's series is loosely based on that of the books by Jane's Information Group, a United Kingdom-based company which provides unclassified reference works on military organizations, technology, and equipment.[2] Each Jayne's guide covers one space navy as seen in the Honorverse books, as well as its attendant marine corps.

Released so far have been books covering the Royal Manticoran Navy (including the Royal Manticoran Marine Corps) and the People's Navy (and the People's Marine Corps). Planned future books as of 24 February 2008 will also cover the Grayson Space Navy, the Imperial Andermani Navy, and the Silesian Confederate Navy. The Jayne's guides and Saganami Island expansions are planned together, so that information in one will be consistent with information in the other.