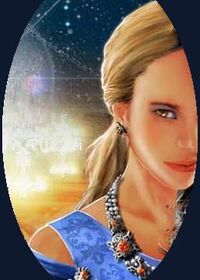 Princess Ruth Winton was a Manticoran citizen and an adoptive member of the Royal family.

As a young adult, she weighed sixty kilograms, and was 167 centimeters tall. (CS2) Her hair was golden blond. (CS1)

Ruth was the natural daughter of Ephraim Templeton of Masada and Judith, his Grayson-born junior wife. During her escape from the Endicott System with the Sisterhood of Barbara, Judith met Crown Prince Michael, who was serving at the time as a midshipman aboard the Manticoran light cruiser HMS Intransigent. (HHA4.1: PL)

The two married a few years after the return to Manticore, and Michael adopted her newly-born daughter, Ruth. Michael was eventually superceded as Crown Prince, but his daughter was treated as a Royal Princess, being a niece of Queen Elizabeth III, even after he was no longer the heir to the throne. (CS1)

Princess Ruth's existence was at first kept quiet, until the Star Kingdom's position on the conflict between Masada and Grayson was clarified. Newsfax journalists were allowed some access to her in her youth, but by the age of about six, she had decided she preferred to be out of the public eye. She received an excellent, though somewhat sheltered, education, and showed both considerable aptitude for and great interest in many of the topics necessary as background for one intending to specialize in intelligence matters. In particular, she became an excellent computer hacker by her early twenties.

She was part of the Manticoran party which traveled to Erewhon to honor the Galaxy's foremost human rights campaigner, Hieronymus Stein, after his assassination. She travelled as Captain Anton Zilwiki's daughter, Berry, and vice versa (after a nanotech modification for both girls). They became great friends, the first such relationship for Ruth. While on Erewhon, both became embroiled in the events of a Masadan attempt to kidnap her, and the subsequent successful attempt to evict Manpower Incorporated from its nearby plantation planet, Verdant Vista (aka Congo). Both girls played major parts in the enterprise.

After the action, Berry became Queen of the new nation of freed slaves, the Kingdom of Torch, partly on Ruth's initiative. Ruth became the head of the new nation's Intelligence Service – with the assistance of Anton Zilwiki, the primary force behind the very small, but growing, Audubon Ballroom Navy, and of Victor Cachat, the primary planner of the Congo liberation and shortly thereafter the chief of the Republic of Haven's Federal Intelligence Service for both Torch and Erewhon. (CS1)