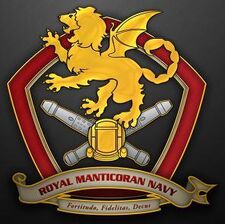 The Royal Manticoran Navy, or RMN, was the main military force for the Star Kingdom and Star Empire of Manticore.

Its officers were trained at Saganami Island Academy.

The official motto of the RMN was "The Tradition Lives." (Companion)

The genesis of the Royal Manticoran Navy could be traced back to before Manticore's official colonization. The initial fund raising for the colony expedition was so successful that there surplus capital remained, capital that was used to create the Manticore Colony Trust. The MCT was used to help protect the colonists' interests as they made their way from the Sol System to Manticore. Part of this fund was used to build four frigates to protect the system from claim jumpers in 1389 PD. These frigates, the first units of the Manticore System Navy, were the first naval force of the Manticore Colony. (HHA1.4: UHH, Companion)

When the Star Kingdom of Manticore was established in 1485 PD, the naval forces of the Manticore Colony became the Royal Manticoran Navy.

Around 1604 PD, the HMS Queen Elizabeth I's inertial compensator failed due to sabotage. This was the last time in over three hundred T-Years that a compensator would fail in the RMN. (HH3)

In 1672 PD, Commodore Edward Saganami took HMS Nike to a fight to the death in order to protect a convoy against a pirate attack. His death not only protected the convoy, but also destroyed several times his own tonnage. Saganami's final battle set the "Saganami tradition", which the RMN followed ever since. (HH1, HH3)

The Saganami March was adapted as the official anthem of the RMN some time later. (HH4)

In the late 1890s PD and the early 1900s PD, the Navy went through a series of expansions to help counter the growing People's Republic of Haven threat.

In 1900 PD, the Navy still had enough command-level officers to fill the ranks. The navy received a Case Zulu, the code for an imminent invasion, from HMS Fearless at Basilisk. (HH1)

In 1903 PD, the RMN destroyer, HMS Madrigal fought at the First Battle of Yeltsin's Star with the Grayson Space Navy. (HH2)

The Lords of Admiralty are nominated by the Monarch, from a list of candidates selected by the Prime Minister. The final nomination was approved by a majority vote of the House of Lords. The selection of the Space Lords followed a similar process, nominated from a list provided by the First Lord of Admiralty. (Companion)

By 1900 PD, there were two schools of tactics. The first school was the traditionalists lead by Admiral of the Green Hamish Alexander. The second school was the jeune ecole, which was lead by Admiral of the Red Lady Sonja Hemphill. The jeune ecole viewed the tactics of the time as indecisive, so formalized that waging a decisive campaign was nearly impossible with current weapons. Admiral Hemphill and her group theorized that the growing number of better weapons and technology would make the traditionalist view outdated and outmoded. The traditionalists viewed the jeune ecole's material warfare approach as expensive and wasteful, and were horrified at the loss of life the jeune ecole were willing to embrace in order to achieve that superiority. The RMN has managed to steer a middle course between the two (though not without bitter infighting), with carefully considered new technologies adopted into existing schools of tactical thought. (HH2)

In an effort to provide an adequate defense against Haven, a string of supply and maintenance bases were built that went through many systems such as Yeltsin's Star System and by 1905 PD, the line was completed in the Hancock System. (HH3)

Like all navies, the RMN performed a vast amount of contingency planning in order to be prepared for eventualities that could possibly arise in the future. These plans included:

The RMN is primarily a interstellar navy. The RMN has been protecting the Manticore Wormhole Junction and the junction's termini since the junction's discovery. This means of travel have given the RMN an edge against other national navies, primarily the Republic of Haven Navy, as well as a huge economic edge in interstellar trade. Because of the high volume of trade, the RMN is more traveled than most as it deploys many of its light and medium combatants for commerce protection.

The RMN was responsible for the support of Basilisk Traffic Control, in charge of customs, to inspect all vessels and material to and from Medusa, to support the Resident Commissioner for Planetary Affairs and the Native Protection Agency, to ensure the safety of the native people of Medusa and the visitors to Medusa, and to ensure the security to the system from all threats. The RMN is responsible for health and immunization of every visitor to the planet, Medusa.

In 1901 PD, the RMN enlarged the picket force at Basilisk.

Uniforms consisted of tunic, blouse, and pants. The tunic was black and gold with the rank strips on the epaulets and the wrists. On the collar of the tunic, the rank was displayed. The left front side of the tunic was used to display medals, hyper-capable command stars, and other. Officers who currently commanded a hyper-capable vessel wore the White Command Berets. Flag officers wore black berets, with the exception of the commander of the HMS Unconquered, who wore the white beret.

Originally, officers wore a visored cap, but it was replaced by the beret in the middle of the 18th Century PD. (SI1)

In 1900 PD, female officers wore their hair in the newer long style.

Prior to the First Havenite-Manticoran War:

Readiness One or Battle Stations[]

Highest state of alert, in preparation of imminent combat. This state put significant stress on the crew, and was not intended to be maintained for long.

Also known as General Quarters, Readiness Two meant that all engineering and life-support systems, CIC, tactical, and passive sensors were manned. Active sensors were placed on immediate readiness, point defense laser clusters were active and under computer control, counter-missile launchers were loaded, passive defensive systems and EW were ready for instant activation, offensive missile tubes were loaded, half the energy mounts were fully manned, with air evacuated, on a rotating basis, and twenty-five percent of the watch would be allowed rest on rotating breaks. (SI2)

During Readiness Two, which was one step short of Battle Stations, Auxiliary Control would be reduced to a skeleton watch. It was intended to be maintained for lengthy periods of time. (HH13)