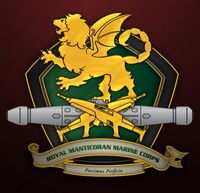 The motto of the RMMC was Possimus Perficio ("Can Do").

The Royal Manticoran Marine Corps was formally established in the year 1516 PD, tracing its roots back to the Manticore System Navy's Fleet Marine Forces, a small force first created in 1438 PD, shortly after the first contact with the Free Brotherhood. The original boarding and shipboard security teams formed the core of the new force.

Until the mid 17th Century PD, the RMMC remained the only national armed service dedicated to ground or boarding combat. In 1665 PD, shortly after the Ranier War, Parliament voted to merge the Marine Corps into the Army for cost efficiency reasons. The majority of the senior officers, however, came from the Marine Corps. A few generations later, the Marines reemerged as a separate organization intensively trained to perform both shipboard and planetary missions.

With the primacy of the RMN within the Star Empire of Manticore, the RMMC became the senior ground combat arm of Manticoran state. Originally tasked mainly with providing security and boarding parties for starships, the Corps's responsibilities were extended to provide emergency landing parties, security parties, and boarding parties for ships, shipboard police under the authority of the master at arms, shipboard duty stations at GQ or battle stations, and provide garrisons, guards, and security detachments for Manticoran enclaves on various planets. (Companion)

The RMMC was stationed on planets, stations, and vessels with duties such as security. Marines took part in boarding and landing parties. During Naval combat, Marines man the ship's weapon and defensive stations as well as assist in damage control. (HH1) The RMMC's main "boot camp" was not located on Saganami Island, but on the planet Gryphon, taking advantage of the harsh climate for training. (infodump)

Another RMMC duty was to guard the Star Kingdom's embassies. (HH2)

Marines quarters on a naval ship were known as "Marine Country". (HH4)

The honorary rank of Colonel of Marines was granted to Naval captains too junior for promotion to flag rank as a way for the Crown to show special approval. It also included a Marine Colonel's pay scale. (HH4)

To avoid confusion in the chain of command on a RMN Ship, a Marine Captain would be called a Major for the duration of the voyage. (HH1)

The marines used a battle armor that camouflaged with the environment. The armor could last a little under four combat hours in assault configuration.

The RMMC officer's undress uniform consisted of a tunic identical to that of the Navy, space black with gold trim on the collar and front panel and a solid green blouse under it. On the right shoulder was the RMMC patch in red and gold. The left bore the unit patch for the officer's assignment. The collar insignia was identical to that of the Navy. The tunic had no shoulderboards, instead displaying the collar insignia and an RMMC pin on the plain black strap. Medals and ribbons were worn on the left breast. The trousers were green and bloused into standard Navy boots. A Green beret was worn with the crest of the RMMC on the left side. (JIR1)

The Marine enlisted undress uniform was similar in style to the Navy's black, one piece jumpsuit, with rank insignia and name worn on the upper left breast. Marine noncomissioned officers used the same color coded piping on the shoulder seams as Navy, using dark Sphinxian green, which was distinct from the brighter green used for Naval medical ratings. The ship's patch was worn on the right shoulder, above the RMMC patch. The rating insignia was worn on the left arm, with specialist insignia above.

The bottom half of the jumpsuit was solid green, cuffs bloused into the boots and had cargo pockets. The beret was green and identical in all ways to that worn by Marine officers. (JIR1)