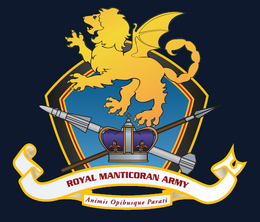 The Royal Manticoran Army (or RMA) was the primary ground combat branch of the Star Kingdom of Manticore's armed forces.

The Army's main mission was to fight enemy ground forces, secure and maintain control of planetary surfaces, and maintain the peace against uprisings or unrest when called to do so by the Government. For that mission, the Army was equipped with tanks and other armored vehicles, sting ships, artillery, and power armor. The Army also maintained the Royal Manticoran Army Atmospheric Command, which could effectively be thought of as the Royal Manticoran Air Force.[1]

As during peacetime the bulk of the military needs of the Star Kingdom were met by the Royal Manticoran Navy and the Royal Manticoran Marine Corps, the Army was usually severely downsized, and its activity focused upon improving its capabilities and training for the event of a war. In wartime, however, the Army was greatly expanded to meet the needs of ground troops to hold and secure enemy territory following initial assaults by the Marines. (HH6)

The Royal Manticoran Army was formally established by King Roger II in 1648 PD, the youngest of the Star Kingdom's three military services. It replaced the individual Planetary Guards the three inhabited planets of the Manticore System had employed previously, and first saw major combat in the Ranier War of 1660 to 1662 PD. (Companion)

Soon after, the Marines were merged into the Army, only to be reinstated as a separate branch about one hundred T-years later. Despite the separation, both the Army and the Marines maintained the same rank structure. (HH4)

In the 18th Century PD, the Royal Army intervened during the Gryphon Uprising to crush the unrest and restore peace and order on Gryphon. (UHH)

In 1883 PD, the Army was responsible for securing the site of the accident which claimed King Roger III's life. (HHA2.3: QG)

During the First Haven-Manticore War, the Army moved into occupied worlds to maintain security and control as the Navy and the Marines continued their advance. This also included taking over the occupation of the planet Masada from the Royal Marines. General Marcel was put in charge of the Masadan occupation. (HH5, HH6)

A famous elite unit of the Royal Army was the Queen's (or King's) Own Regiment, which served as the household guard of the Manticoran monarch and the royal family. (CS1)