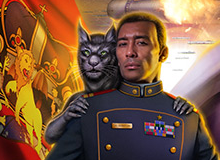 Roger III was the fifteenth reigning monarch of the Star Kingdom of Manticore.

Roger was the oldest child and only son of Queen Samantha II and Prince Consort Gerent Manoussos-Winton; he had one younger sister, Caitrin Winton-Henke. Thus, he was also the brother-in-law of Edward Henke and the uncle of Calvin and Michelle Henke.

He later became the husband of Queen Consort Angelique and father of Elizabeth and Michael Winton. (HHA2.3: QG) Roger and Joanna Winton were his grandchildren. (HH8)

He was bonded to a treecat named Monroe.

Roger Michael Danton Maxwell Winton was born in the Star Kingdom of Manticore in 1809 PD, the first-born son of Queen Samantha II. Following a tradtition of the Royal family, he joined the Royal Manticoran Navy around 1827 PD, rising to the rank of Lieutenant (senior grade) within the next seventeen T-years; in 1844 PD, he served as executive officer of the destroyer HMS Wolverine, but was "kept in the loop" on intelligence analyses which many officers senior to him would not see. In the following years, he rose to the rank of Lieutenant Commander and was given command of the destroyer HMS Daimyo. In two tours of duty in the Silesian Confederacy, his ship eliminated three pirates, one "privateer", and two slave ships. (Companion) After his mother had ruled the Star Kingdom for fifty-five T-years, second longest in Manticoran history, he succeeded her in 1857 PD.

The Royal Manticoran Navy's military build-up as a reaction to the People's Republic of Haven's growing expansionism began under his reign. (HH7)

Prior to Queen Elizabeth III's visit to Grayson, the last time a Manticoran monarch made a state visit to another government was when Roger III visited San Martin in 1872 PD, eight T-years before the People's Republic of Haven took over Trevor's Star. (HH9)

King Roger died in a grav-skiing accident on the Indigo Salt Flats that was actually an assassination by a Haven-backed conspiracy, a fact well known to Queen Elizabeth III and Crown Prince Michael. The assassination was carried out by substituting a sabotaged grav-ski for one that Elizabeth had given him as a gift. The motive for the assassination was that it was hoped a young Elizabeth could be manipulated by her regent into a shift from her father's anti-Haven policies. At the time of his death, he had ruled for twenty-five years. (HH9, HHA2.3: QG)

King Roger's untimely death was greatly mourned by his people, and his policy of fierce opposition to Havenite expansionism was continued in the decades to come. (HH7)

The superdreadnought HMS King Roger III was named after him. (HH11)