Honorverse
Register
Don't have an account?
Sign In
Advertisement
in: Ship Classes, Havenite Ship Classes, Republic of Haven,
and 2 more 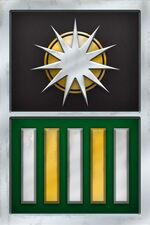 Following the implementation of the DuQuesne Plan, the newly rechristened People's Navy of the People's Republic of Haven commenced a campaign of territorial expansionism in the 1850s PD and assumed a position at the spearhead of the Legislaturist attempt to retain power by subsidizing Haven's collapsing welfare economy with the spoils of conquest, eventually bringing every settled star system within one hundred light-years of Haven itself into their sphere. The Legislaturalist-dominated admiralty of the People's Navy used every conceivable tactic in their arsenal to achieve their objectives, including the use of Q-ships such as those used in the Invasion of San Martin in 1880 PD and the Sheldon System. For fifty years, the Legislaturalists held on to power through the conquests of the People's Navy, but in 1900 PD, the dismal economic projections of their political masters sent the People's Navy on the road to conquer new sources of income to support its bloated state. With southern expansion blocked by the Republic of Erewhon's mutual defense treaty with the Solarian League, the People's Navy turned westward to the systems of the Silesian Confederacy. But, the path to Silesia was blocked as well by another obstacle: the Star Kingdom of Manticore.

Leery of its armament program and its attempts to organize a unified resistance to Havenite expansion in their direction, the Legislaturalists knew Manticore had been an avowed enemy of the People's Republic since the enacting of the DuQuesne Plan, its King Roger III and his daughter and successor Queen Elizabeth III adamant that war between their Star Kingdom and the People's Republic was inevitable. Furthermore, while numerically superior, the People's Navy lacked the sophistication and technological abilities that were the hallmarks of the Royal Manticoran Navy. (HH1, UHH)

Prior to the First Havenite-Manticoran War:

Prior to the Second Havenite-Manticoran War