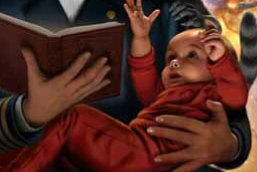 Raoul, the biological child of Honor and Hamish Alexander-Harrington, was born in one of the full-scale operating rooms of the Briarwood Reproduction Center in Landing on the planet Manticore in early 1921 PD. He had been tubed due to his mother's military duties.

Lady Honor immediately declared him her legitimate son and heir in front of her parents, spouses, armsmen, and close friends, among which were Michelle Henke, Alice Truman, Alistair McKeon, and Queen Elizabeth III of Manticore.[1]

Some time later, Raoul was baptized in King Michael's Cathedral in both the faith of the Manticoran Second Reformation Roman Catholic Church and the Grayson Church of Humanity Unchained. His godparents were Queen Elizabeth III, Prince Consort Justin, Katherine Mayhew, and Alistair McKeon. (HH11)

Even when he was still a baby, the treecats realized he had inherited his mother's latent telepathic abilities. (HH14)