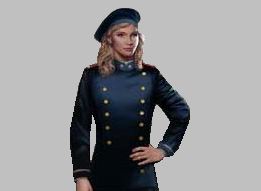 A third-generation prolong recipient, Pavletic looked even younger than she actually was. She was petite, delicately built, with honey-blond curly hair, blue eyes, a snub nose and freckles. Her hair very curly, so she kept it less five centimeters long. In her own private opinion, she looked like a flat-chested thirteen-year-old at the age of twenty-one. (SI1)

Pavletic was born in the Star Kingdom of Manticore in 1899 PD.[1] Her family was a major shareholder of Pavletic, Tilliotson & Ellett, one of the oldest Manticoran shipping lines. She applied to and was accepted by the Royal Manticoran Naval Academy on Saganami Island, where she became good friends with fellow cadets Helen Zilwicki and Aikawa Kagiyama.

She stood first in her class for flight training every term, evidence of a considerable ability.[2] She graduated in the class of 1920 PD and was assigned to HMS Hexapuma for her midshipman cruise. During the ship's maiden mission in the Talbott Cluster, she became Captain Aivars Terekhov's preferred pinnace pilot, often accompanying him during landing operations. She was a popular middie aboard the ship. She saw action as one of the pilots aboard the pinnace which engaged the captured freighter Emerald Dawn during the Battle of Nuncio.

Ragnhild Pavletic was killed when her pinnace, Hawk-Papa-One, was destroyed by point defense cluster fire from the Mesan armed freighter Marianne, while in orbit around Montana. (SI1)

Retrieved from "https://honorverse.fandom.com/wiki/Ragnhild_Pavletic?oldid=82723"
Community content is available under CC-BY-SA unless otherwise noted.