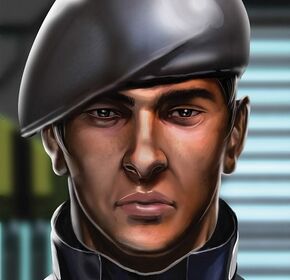 Rafael "Rafe" Cardones, SC, OG, was a Manticoran citizen and an officer of the Royal Manticoran Navy.

In 1900 PD, Cardones held the rank of Lieutenant (junior grade), serving as Assistant Tactical Officer aboard the light cruiser HMS Fearless. He took over as the ship's tactical officer after Lieutenant Andreas Venizelos was assigned to Basilisk Traffic Control as a customs inspector. He accidentally programmed the recon drones wrongly, but he was able to fix it, and was later injured during the First Battle of Basilisk.

In 1901 PD, he was promoted to Lieutenant (senior grade) and assigned to the new Fearless as the tactical officer. (HH1)

Cardones was awarded the two medals for his part in First Basilisk, the Order of Gallantry and the Monarch's Thanks.

He helped persuade Carolyn Wolcott to go to her executive officer, Lieutenant Commander Andreas Venizelos, about her sexual assault by a Grayson Space Navy officer. During the Battle of Blackbird, Cardones coordinated his efforts with Lieutenant Commander Amberson, HMS Apollo's tactical officer. In the hours before the Second Battle of Yeltsin's Star, he was able to give words of encouragement to Ensign Wolcott. During a brief interlude in the battle, Cardones was ordered to take some time to rest. He used the ECM drones of the Thunder of God as beacons to sneak in a missile with a nuclear warhead. The Thunder of God retreated with massive damage. (HH2)

He was temporarily detached to the Office of Naval Intelligence's Tech Team 4 to work on a new weapon that was rumored to be a "super grav lance". To save Fearless, he brought up the wedge on their ship, an action against orders that actually succeeded as a tactical ploy. (HHA4.2: WOS)

As a Lieutenant Commander, he served as Captain Harrington's tactical officer aboard HMS Nike. (HH4)

As a Commander, he was Harrington's Executive Officer aboard HMAMC Wayfarer and participated in the RMN anti-piracy operations in the Silesian Confederacy. (HH6)

He was later promoted to Captain (junior grade) and marched at the head of the horses pulling the caisson in Lady Harrington's funeral procession after her faked execution by the People's Republic of Haven. (HH8)

He commanded a LAC carrier during Operation Buttercup. (HH9)

In 1923 PD, Cardones was due to be promoted to Rear Admiral and transferred to command a division of battlecruisers, but had yet to be promoted at the time of the Battle of Galton. (CS4)