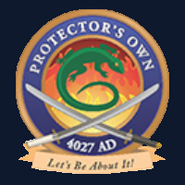 Its motto was "Let's Be About It", a phrase regularly uttered by Admiral Honor Harrington, its first commanding officer.

The Protector's Own was created in the beginning of 1914 PD as Benjamin IX's answer to the inadvertent constitutional crisis created by Steadholder Honor Harrington organization of the Elysian Space Navy using her Grayson Admiral's rank. According to the Grayson Constitution, only the Protector was allowed to raise military forces and such an act committed by a Steadholder was subject to the death penalty.

In 1918 PD, Benjamin IX authorized a long range "training" exercise to join the Protector's Own squadron with Admiral Harrington's forces at Sidemore Station. This deployment helped the RMN force at Sidemore Station drive off the Havenite incursion under Admiral Lester Tourville. (HH10)

Former Elysian Space Navy vessels were supplemented by newly built units over time. The Protector's Own in the initial stage of development consisted of:

The Protector's Own was initially equipped with the captured prizes of the Elysian Space Navy, but Benjamin IX planned to expand it with ships of the wall, CLACs, and appropriate screening elements. (HH9)

In 1919 PD, the Protector's Own had been expanded to include twelve Medusa class SD(P)s, six Covington class CLACs, and six battlecruisers. (HH10)

When created the Protector's Own Squadron was staffed by volunteers from the prisoners that escaped from the Havenite Hades Planetary Prison with Steadholder Harrington. Foreign personnel of the Protector's Own became Protector's personal vassals. After six years of service, they were entitled to obtain Grayson citizenship. (HH9)

In 1923 PD, Mercedes Brigham accepted a promotion to Vice Admiral in the GSN and replaced Admiral Yu had the commanding officer of the Protector's Own[1]. (CS4)

The service uniform of the Protector's Own was colored maroon and gold, the colors of the Mayhew Clan. (HHA6.5: OS)

It's insignia was a flame-enshrouded salamander.[2] (HH10)