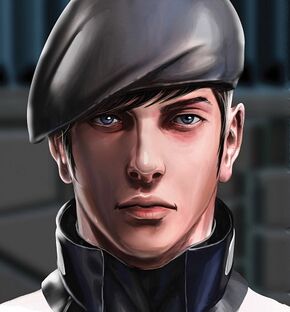 Sir Prescott David "Scotty" Tremaine, OG, was a Manticoran citizen and an officer of the Royal Manticoran Navy.

Tremaine was born in 1877 PD. He had two sisters and an older brother. (HH9) During his time at the Royal Manticoran Naval Academy, he qualified as a high expert in small arms. Corporal Liggit knew him at that time. (HH2)

In 1900 PD, Tremaine held the rank of Ensign and was the Boat Bay Officer aboard the light cruiser HMS Fearless during its mission in the Basilisk System. He was detached from the ship as part of a smuggling interdiction effort, notably assisted by Petty Officer Horace Harkness, charged with inspecting shipments. The team discovered a large amount of previously undetected smuggling, among which was a smuggling operation involving RMMS Mondragon. Tremaine was also part of the RMN support for a Native Protection Agency attack on a drug lab in the Mossyback region. He commanded a pinnace, and was responsible for destroying the fleeing airship which probably contained those who had set off the explosion which killed about 60 NPA personnel.

Later, he and his crew discovered a power link to that lab from one of the orbital power collectors the Manticoran government had installed at Medusa. He also piloted a pinnace during the defensive attack on the berserker mob of native Medusans encouraged and supported by Haven personnel, thus helping save many off-worlders from their intended slaughter. (HH1)

Tremaine was awarded two medals for his part in the First Battle of Basilisk, the Order of Gallantry, and the Monarch's Thanks.

In 1903 PD, Tremaine held the rank of Lieutenant (JG) and was assigned to HMS Troubadour as a pilot. He helped persuade Carolyn Wolcott to go to her executive officer, Lieutenant Commander Andreas Venizelos, to report an incident of belligerently insulting behavior (almost a sexual assault) committed by a Grayson officer. Later in Troubador's deployment to the Grayson system, Tremaine piloted Captain Harrington to Blackbird Base after it was taken, and was ordered by Commander McKeon to escort her while she was there. He intervened when she, enraged by Masadan treatment of Manticoran prisoners, nearly executed the BlackBird Base officer responsible. He later fought at the Second Battle of Yeltsin's Star, escaping the destruction of Troubadour in a pinnace. He returned to Manticore aboard HMS Fearless. (HH2)

As a Lieutenant (SG), he was assigned to HMS Prince Adrian. After the death of Paul Tankersley in a duel, he insisted on accompanying the Marines who abducted Denver Summervale from the chalet on Gryphon where he was hiding. (HH4)

When Captain Alistair McKeon learned that a flight ops officer was needed for HMAMC Wayfarer, he detached Tremaine, accompanied by Horace Harkness. (HH6)

Promoted to Lieutenant Commander, Tremaine became Commodore Harrington's staff electronics officer, and was aboard Prince Adrian when she surrendered. He was hurt and disappointed when Horace Harkness seemingly defected to the People's Navy, and later felt guilty for doubting Harkness, who had faked his defection in order to stage a prisoner escape from PNS Tepes. He rigged the pinnace that brought up its wedge in the boat bay, destroying Tepes, and made it to the surface of the prison planet Hades. (HH7)

He was given command of ENS Krashnark from Captain McKeon, and made it safely back to Alliance space with the rest of the Elysian Space Navy. (HH8)

After promotion to Commander, he commanded the LAC wing of HMS Hydra, with his personal LAC being HMLAC Bad Penny. (HH9)

After promotion to Captain (JG), he replaced Captain Thurmond as COLAC of HMS Werewolf, with HMLAC Dacoit as his personal LAC. (HH10)

After promotion to Captain (SG), he was given command of Cruiser Division 96.1, assigned to the Tenth Fleet, where Harkness continued to serve as his EW officer. (HH12)