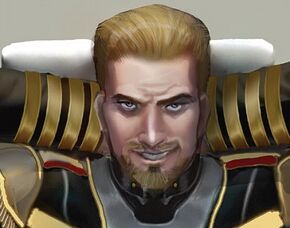 Lord Pavel Young, 11th Earl of North Hollow, was a Manticoran citizen and an officer of the Royal Manticoran Navy.

Young was born as the oldest son of Dimitri Young, 10th Earl of North Hollow, in the second half of the 19th Century PD. (HH1)

As a cadet at the Royal Manticoran Naval Academy on Saganami Island, Young was known as a womanizer, and forced himself on fellow cadet Honor Harrington, but was badly beaten up by her in self defense. Due to Harrington's failure to fully disclose the cause of the incident (caused by her embarrassment and shame), Young was not discharged from the service, despite the severity of his actions. However, his father's connections did not prevent him from receiving an official reprimand for "conduct unbecoming," and, more humiliatingly, being forced to apologize to Harrington in front of Commandant Hartley. (HH1, HH3, OBS)

In 1895 PD, Young was placed on the Captain's List, but after becoming a Captain, his superiors were not impressed with him.  Admiral James Bowie Webster, in private conversation with Admiral Hamish Alexander, succinctly described Young as "an arrogant, over-sexed, incompetent, bigoted snot," and freely admitted that Earl North Hollow's influence with the Conservative Association was the sole reason why Webster hadn't relieved his son of duty long ago.

In 1899 PD, as commanding officer of HMS Warlock, he was assigned to the RMN picket station in the Basilisk System. In 1900 PD, he authorized the Havenite Q-ship PMSS Sirius to pass through customs without fully checking the ship's manifest or cargo.

After HMS Fearless was assigned to the station, he took the Warlock to Manticore for a three-month refit, with the intent of shirking his duties and leaving Harrington solely responsible for the various seemingly intractable problems faced there. However, upon hearing that Harrington was actually making a grand success of her duties, and antagonizing several mercantile and political allies of his family in Manticore, Young attempted to speed the refit so he could return to Basilisk and re-assume command. Admiral Craig Warner slowed the refit down, first on his own initiative and then at the request of Admiral White Haven. Young issued numerous complaints, but was unable to return to his station before the First Battle of Basilisk.

Several Havenite military officers and politicians involved in planning Operation Odysseus remarked with consternation on Young's replacement by Harrington, having counted on Young's inattention and general indolence to work in Haven's favor when the operation was launched. Indeed, Haven's Naval Intelligence bureau tried to covertly assist Young's efforts to resume his station on Basilisk, by passing information on Harrington's parents to Klaus Hauptman, with which to blackmail her. (HH1)

Although his family's influence prevented Young from being court-martialed, or even formally questioned about his actions (or lack of them) in Basilisk, he was unofficially punished, with Warlock being re-assigned to convoy escort duty in the Silesian Confederacy in 1901 PD. They were also assigned astrographical survey work. (HH1, HH3)

Shortly before the First Battle of Hancock, Young and Warlock were assigned to Heavy Cruiser Squadron 17, where Young became the senior squadron captain. He and Commander Arthur Houseman conspired to worsen Commodore Van Slyke's opinion of Captain Harrington. During the Battle of Hancock, after Van Slyke was killed and Harrington failed to order the Task Force to scatter, he ordered the squadron to do so out of fear of destruction. He was the only captain who failed to return to formation when Harrington ordered it.

Vice Admiral Parks relieved Young of command and had him placed under arrest for cowardice under fire and as unfit to command a Queen's ship. (HH3)

In his following court-martial, Young was convicted of the charges that did not carry the death penalty and was dishonorably discharged from the Navy. He succeeded his father, who died of a heart attack at the end of the trial, as Earl of North Hollow. To everyone's surprise, he voted for declaring war on the People's Republic of Haven as a political ploy.

He later paid Denver Summervale to kill both Honor Harrington and Paul Tankersley. After Harrington surprisingly killed Summervale, Young paid for ordinary killers to try to kill her, but when she took her seat in the House of Lords, she challenged him to a duel.

At the duel, he treacherously shot her with her back turned. She and the Master of the Field killed him in retribution. His younger brother Stefan succeeded him as Earl of North Hollow. (HH4)

Honor Harrington considered Young an example of the evils of the patronage system in the Navy. (HH9)