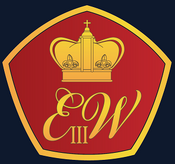 The Monarch's Own Regiment, called the King/Queen's Own depending on the ruling monarch's gender, was an elite unit of the Royal Manticoran Army tasked with guarding the monarch and the Royal family.

The Monarch's Own was created with the coronation of King Roger I, when the Manticore and Sphinx Planetary Guards each "donated" a company and a half of their troops to form the core of a new battalion. Gryphon followed as soon as its population could support its own Planetary Guard. The whole unit was merged with the Army in 1665 PD.

The Monarch's Own contributed forces to front-line combat within the Star Kingdom at wartime, usually deploying one of its three "planet battalions" to the frontline, leaving the other two to the normal duties. In addition, the Monarch's Own was the Army's primary ceremonial unit. (Companion)

The Monarch's Own Regiment was organized into four battalions, each of which was recruited and raised from the population of a single world of the Star Kingdom, plus a "training battalion" which both trained new recruits and provided opposition forces for training purposes.

The Adrienne Cross was designed by King Roger II to honor members of the Monarch's Own who risked or lost their own lives defending the Royal Family. (CS1)

Retrieved from "https://honorverse.fandom.com/wiki/Monarch%27s_Own_Regiment?oldid=76425"
Community content is available under CC-BY-SA unless otherwise noted.