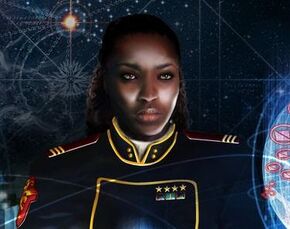 Lady Michelle Henke, CGM, Countess Gold Peak, was a Manticoran Peer of the Realm and an officer in the Royal Manticoran Navy.

A member of the Royal family, Henke was called "Mike" by her friends.

Gloria Michelle Samantha Evelyn Henke was the daughter of Edward Henke, Earl of Gold Peak, and Duchess Caitrin Winton-Henke, and the younger sister of the Honorable Calvin Henke. (HH9)

Thus, she was also a niece of King Roger III of Manticore and a first cousin of his daughter and successor, Queen Elizabeth III, and the Queen's brother, Lord Michael Winton. Paul Tankersley was a fourth cousin. (HH3)

She enjoyed coffee, unlike her best friend, Honor Harrington. (HH3)

Though a skilled tactician, she herself noted that hers was a more direct and less complex personality than Honor's. She preferred to avoid shades of grey, and was not inclined to "empathize with" or "agonize over the consequences to" an enemy in the way Honor was; nor was she as inclined to soul-searching. As she rose to fleet command, however, she was forced to confront the inherent weaknesses in that approach, and balance her own personality with the responsibilities of high-level command. (HH12, SI2)

Henke was born in the Star Kingdom of Manticore in the second half of the 19th Century PD. She grew up as a member of the Royal family and was close to her cousin Elizabeth, her future queen and empress.

Once grown, she decided to become an officer in the Navy. She and Honor Harrington roomed together for three T-years at the Royal Manticoran Naval Academy on Saganami Island, where she helped Harrington through mathematics and the intricacies of social events. Some of Henke's family would visit her at the Academy. Henke was also the one who reported Pavel Young's attempted rape of Harrington to the Commandant. In 1898 PD, she met with Harrington, who was her junior at the time. (HH3)

As a commander, she served as Harrington's executive officer aboard the battlecruiser HMS Nike. She would attend an all-squadron meeting on the Nike after a poor squadron performance during a war games exercise. (HH3)

Promoted to Captain (junior grade), she commanded the light cruiser HMS Agni. In this capacity, it was her sad duty to bring Harrington the news of the death of Paul Tankersley. (HH4) She was promoted to full captain some time later. (HH7)

After the People's Republic of Haven claimed to have executed Harrington, Henke carried the Harrington Sword in Harrington's funeral procession in Landing. (HH8)

Some time later, she was put in command of the heavy cruiser HMS Edward Saganami. After her father and brother were killed during the Havenite-Masadan terrorist attack in the Yeltsin's Star System, she became the new Countess Gold Peak and rose to fifth in the line of succession to the throne of Manticore. (HH9, HH10)

She was promoted to Commodore and later to Rear Admiral, being put in command of Battlecruiser Squadron 81. As part of Operation Cutworm III, she raided the Solon System along with the rest of Task Force 82, but was defeated in the battle for the system and taken a prisoner of war by the People's Navy after her flagship, HMS Ajax, was destroyed. (HH10, HH11)

However, after she had recovered, Havenite President Eloise Pritchart sent her back to Manticore with an offer of truce for Queen Elizabeth. In turn, Admiral Gold Peak agreed that she would not serve in a position where she had to fight Havenite units for the remainder of the war. In order to honor the agreement, the Admiralty made her the commanding officer of the new Tenth Fleet, and sent her to the Talbott Quadrant to support Vice Admiral Augustus Khumalo and the newly appointed Imperial Governor, Baroness Medusa.

For this action, Fleet Admiral Sandra Crandall came to the Spindle System with SLN Task Force 496, demanding Gold Peak to be turned over to Solarian custody. Gold Peak, however, was prepared for the attack and thoroughly beat the Solarian force in the Battle of Spindle; as a result, dozens of ships and a total of almost 400,000 prisoners of war fell into Manticoran hands. (HH12)

Admiral Gold Peak later won the first offensive victory of the war by liberating the Madras Sector from the influence of the Solarian League's misrule. Her fleet then proceeded to Mesa, taking the system with little resistance, but not in time to keep the Alignment from carrying out most of Operation Houdini. (SI4)