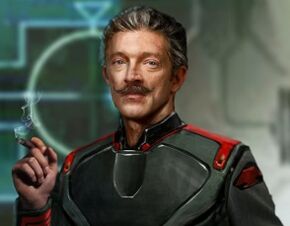 Lester Tourville was a Havenite citizen and an officer of the Republic of Haven Navy. He was one of the most important Havenite flag officers of the First and Second Havenite-Manticoran War, and the overall commander of the Havenite forces in the Battle of Manticore.

By 1911 PD, Tourville was widely considered one of the People's Navy's greatest leaders. As a Rear Admiral, he commanded the victorious Havenite task group in the Second Battle of Adler, his flagship at the time being PNS Count Tilly. He thoroughly disagreed with Cordelia Ransom's plan to execute Honor Harrington after her capture. When he expressed his disagreement, he and his staff were ordered to accompany PNS Tepes to Hades aboard Count Tilly. When Tepes was destroyed by Horace Harkness' sabotage, Admiral Tourville and Shannon Foraker were the only Havenites who noticed small ships escaped before the ship blew up, and erased the tapes.[1] (HH7)

Tourville and the crew of Count Tilly were held for investigation of his part in the destruction of Tepes. At Admiral Esther McQueen's request, he was released and allowed to return to Twelfth Fleet as Admiral Javier Giscard's second-in-command with the Rank of Vice Admiral. Commanding Task Force 12.2, he led the attacks on Zanzibar and Alizon which were part of Operation Icarus. (HH8)

He later commanded the attack on the Solway System as part of Operation Scylla, and realized his life hung by a thread after Admiral McQueen's failed coup attempt. He was determined to not allow himself to be taken back to Haven to be shot. (HH9)

After Admiral Thomas Theisman's successful coup and the restoration of the Republic, he was promoted to full Admiral and spent the next three and a half years fighting insurgent units within the Republic. At the outbreak of the Second Havenite-Manticoran War, Admiral Tourville led Second Fleet on an assault on Admiral Harrington's task force at Sidemore Station as part of Operation Thunderbolt. In the Second Battle of Marsh, he was trapped between Harrington's task force and her Grayson reinforcements, which had been waiting in hyperspace. After the battle, the remains of his badly damaged fleet limped home to Haven. (HH10)

With fresh units, and a new flagship, the RHNS Guerriere, Tourville was sent on raids into Manticoran-held space, the most successful of which was Operation Gobi, which effectively wiped out the Caliphate of Zanzibar's space industry, as well as the combined Zanzibaran-Manticoran forces assigned to guard them.

As part of Operation Beatrice, Tourville led the combined forces of Second and Fifth Fleet on an attack on the Manticore System, resulting in the Battle of Manticore, the largest space battle in human history. At the end of the battle, Tourville accepted Admiral Harrington's demand that Second Fleet surrender when it was demonstrated that she could hit his ships accurately from a greater distance than he had ever thought possible due to the Apollo missile system. He and his crews were taken prisoners of war. (HH11)

Admiral Tourville was treated well on Manticore, and developed a kind of friendly relationship with Admiral Alexander-Harrington and her treecat, Nimitz. He was surprised to discover that the Manticorans knew about the secret Bolthole facility, even though they did not know its location. While discussing the Havenite leadership with her, he confirmed to Alexander-Harrington that she had killed Javier Giscard in the Battle of Lovat. (HH12)

After President Pritchart's mission to Manticore, which resulted in the formation of the Grand Alliance and a peace treaty between the two star nations, Tourville was freed and given command of the new RHN Second Fleet, the Havenite component of the Grand Fleet. Like other high-level Alliance officers, he was assigned a treecat bodyguard, his being Lurks in Branches, who was said to fit him quite nicely, personality-wise. Thanks to his time on Manticore, he was the only Havenite as of June 1922 PD who could read treecat sign language. (HH13)

In 1922 PD, he was sent to reinforce Admiral Michelle Henke's Tenth Fleet. (HH14)

Tourville smoked cigars, and portrayed a cavalier attitude that caused his enemies and some fellow officers to underestimate his intelligence. His People's Commissioner, Everard Honeker, thought that Tourville acted as if he "belonged on a holystoned wooden quarter-deck with a cutlass and a brace of flintlock pistols in his belt, bellowing orders over the roar of cannon." (HH7)

Oscar Saint-Just refered to him as "Citizen Admiral Cowboy". (HH8)

Tourville was also characterized by his honor and fundamental decency; he went out of his way, at great personal risk, to do the best he could to make sure Honor Harrington and her people were well-treated after they were taken prisoner. He, along with Shannon Foraker, was responsible for erasing the footage of Honor's escape from Tepes, ensuring that she would not be hunted. (HH7, HH8, HH9)

After his second successful attack on Zanzibar, Tourville was offered the Congressional Cross, though Admiral Theisman had his doubts that he would accept it. (HH11)