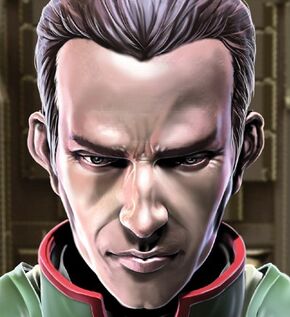 Klaus Hauptman was a Manticoran citizen and head of the Hauptman Cartel, a huge business conglomerate.

He was dark-haired with white sideburns, and had a bulldog jaw. (HH6)

A direct descendant of the company founder Heinrich Hauptman, Klaus was the son of Eric and the father of Stacey Hauptman. (HH1, HH6)

In 1900 PD, Hauptman went to the Lords of Admiralty about Commander Honor Harrington's actions at Medusa. He went further; using a Royal courier as transportation, he went to Medusa to personally demand Harrington stop her harassment (ie, inspections) of Hauptman freighters, but she rebuffed him. After he attempted to coerce her by threatening to fire her parents from the Duvalier Medical Associates, Alistair McKeon told him that Hauptman equipment had been discovered to be associated with the attack which had resulted in massive loss of life by native police personnel, and the magnate's attempts to interfere with the Navy's operations could be seen as collusion in murder and treason. Before Hauptman returned to Manticore, Harrington warned him that if he carried out his threat against her parents, she would kill him in a duel. (HH1ch.20)

Later, during the First Havenite-Manticoran War, Hauptman arranged a move to have Harrington returned to active RMN service from the GSN. With the upsurge in piracy in the Silesian Confederacy, he hoped that she could either thin out the pirates or be killed in the attempt, or both. After hearing of the loss of RMMS Bonaventure, he and his daughter Stacey traveled to the Confederacy aboard the luxury liner Artemis, manipulating the RMN destroyer assigned (unofficially) to convoy him. They were attacked, and when Harrington's Q-ship intervened, Klaus once again showed himself to be petty when it came to dealing with Harrington. However, his daughter severely lectured him and refused to talk to him again unless he apologized for his behavior. Seeing how Harrington handled the situation in Silesia and was willing to sacrifice her command to protect Artemis, Hauptman rethought his attitude and, like his daughter, became a close ally of Harrington on Manticore. (HH6)

Thereafter, he and Stacey kept an eye on Harrington's business affairs for her, expressed support for her when politically motivated false allegations of an affair between her and Earl White Haven were being spread, and even purchased a newsfax as additional support. (HH9, HH10)

Widely known as the wealthiest man in the entire Star Kindgom and wider Star Empire as a trillionaire, Klaus Hauptman was nonetheless a proud man who did not think highly of hereditary privilege. Given his prominence and importance in the Star Kingdom, he could easily have made clear his willingness to accept a peerage as a duke; however, he chose not to, being proud of his family's zero-balancer heritage and presenting himself as a self-made man and a champion of the common people (despite having inherited a significant portion of his wealth). (HH1ch.20, HH6ch.1)

Detesting any form of slavery, he was also a staunch supporter of the Anti-Slavery League, supplying them with up to date warships, built on a non-profit basis. (CS1)

Personality-wise, Hauptman was highly aggressive and did not take kindly to others opposing him, which led to his personal conflict with Harrington. At the same time, he also appreciated the competence of his subordinates and valued their well-being (to the point of instituting a standing ransom offer for his merchant crews captured by pirates), and was able to acknowledge when he had acted badly towards others. (HH6ch.p,1,15)

He was strongly attached to his daughter Stacey, who was the only person he genuinely loved since his wife's death. (HH6ch.15)