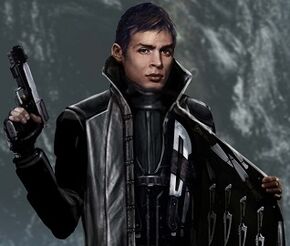 Jeremy X, bred as K-86b/273-1/5, was an escaped Mesan genetic slave and the leader of the Audubon Ballroom.

Jeremy X was very flexible and acrobatic by design, as he was created specifically to be a court jester. (CS1)

K-86b/273-1/5 was bred to be a personal servant of the 86b variant, designed to provide clients with acrobatic entertainment. He escaped, however, and eventually became the head of the Audubon Ballroom, fighting a brutal war against Manpower Incorporated and all other slavers. At that time, he was widely considered one of the most dangerous terrorists in the human-settled universe. (HHA3.3: FtH)

In 1919 PD, Jeremy X became Secretary of War for the newly founded Kingdom of Torch, with Web Du Havel insisting that the office was named "of War" instead of something more ambiguous like "of Defense". The first act of the Kingdom was to declare war on the Mesan star nation. Despite the need for a new tactical approach due to changing realities, the main target of the Ballroom, and of Jeremy, remained the same. (CS1)

In the early days of the new kingdom, Jeremy X was heavily involved in drawing government policy. He also took a personal interest in finding a spouse for Queen Berry and ensuring the succession. (CS2)