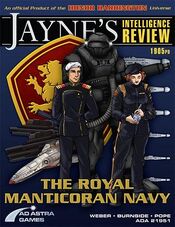 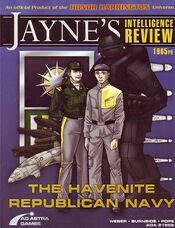 Jayne's Intelligence Review is a series of sourcebooks on the Honor Harrington universe and an official product with material written by David Weber himself.

Its first two volumes, covering the Royal Manticoran Navy and the (People's) Republic of Haven Navy, were published in 2006 and 2007, both being likely derived from Saganami Island Tactical Simulator setting material. A third volume is forthcoming.

Jayne's Intelligence Review is never mentioned in-universe. However, in The Honor of the Queen, Honor Harrington refers to Jane's and the fact that the Grayson Space Navy was not listed there.

Jayne's Fighting Ships of the Galaxy[]

Ad Astra Games also published two "ship books" under the Jayne's Fighting Ships of the Galaxy logo.[1] Both books only contain light ship descriptions. The Star Kingdom of Manticore, the People's Republic of Haven, the Andermani Empire and the Silesian Confederacy's general affairs were described in the Saganami Island Tactical Simulator, which is not marked with the Jayne's logo.

There is also a Talbot Cluster query appendix for Storm from the Shadows, which is available as promotional material as well.