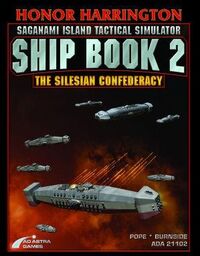 Jayne's Fighting Ships of the Galaxy, Vol. 2 is the second ship book for the Saganami Island Tactical Simulator tabletop wargame, focusing on the starships of the Silesian Confederacy.

Anything can be bought in Silesia, save for Honor... Silesia, a wretched mishmash of corrupt governments, star-navies for hire, piracy and trade opportunities. Long fallen from its heights as an enlightened confederation of planetary governments, Silesia is the proving ground that the Andermani Empire and the Star Kingdom of Manticore send their newly minted officers and crews to patrol.

Ship Book 2 explores the history of Silesia, the customs and uniforms of the Imperial Andermani Navy and Confederacy Navy, while providing pirate hunting scenarios, a sampling of Silesian, Andermani and Pirate ships and the small modular merchant.

Can you protect the civillians caught in the crossfire of Silesia? Or, as a pirate, can you get the freighter before you're overwhelmed by the Manticorans or the Andermani?

Retrieved from "https://honorverse.fandom.com/wiki/Jayne%27s_Fighting_Ships_of_the_Galaxy,_Vol._2?oldid=72410"
Community content is available under CC-BY-SA unless otherwise noted.