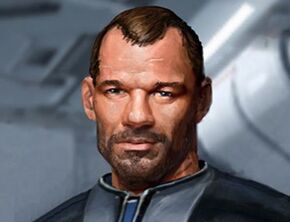 Sir Horace Harkness, PMV, DSO, CGM was a Manticoran citizen and a warrant officer of the Royal Manticoran Navy.

Harkness was born in the Star Kingdom of Manticore and enlisted in the Royal Navy in 1865 PD / 260 AL.

In 1900 PD, he held the rank of Petty Officer and was assigned to the light cruiser HMS Fearless for its mission in the Basilisk System. At that point in his career, Harkness had been up for a promotion to Chief Petty Officer twelve times, but kept getting in trouble for fighting with Marines and smuggling. Ironically, this made him perfect for a special team assembled by Chief Petty Officer Sally MacBride on Commander Honor Harrington's orders, to inspect cargo ships passing through the system and enforce customs regulations more stringently than any previous Naval crew had bothered to. Harkness was notionally under the command of Ensign Prescott Tremaine, the beginning of what would become a long and somewhat legendary partnership. Harkness's sharp eye uncovered a high number of smugglers' dodges, and Tremaine quickly learned to rely on his judgment.

During the First Battle of Basilisk, Harkness was a part of the team organized by MacBride to go to Missile Room Two; after MacBride was injured, he took command. He and his team were in Missile One when Missile Two was hit by an enemy missile, so he led the team back to engineering.(HH1)

In 1903 PD, Chief Harkness was assigned to the new HMS Fearless (CA-286). Tremaine, now a Lieutenant, recommended to Ensign Carolyn Wolcott that if she needed advice from someone other than an officer, that she should go to Harkness. It was later revealed to Honor Harrington that he had married Iris Babcock. (HH2, HH6)

Wherever Tremaine went, Harkness would inevitably be assigned to the same ship. What the Bureau of Personnel did not realize was that Harkness had hacked their records. He and Tremaine were referred to by Admiral Harrington as the "Dreadful Duo". Later they were also refered as "Beauty and the Beast."

In 1911 PD, Harkness was among those crewmembers under Commodore Harrington's command who were captured by the People's Navy. Cordelia Ransom wanted to use this capture as a propaganda weapon and personally took Harrington to her scheduled execution on the prison planet Hades. However, Harkness, acting like he was a defector, earned the trust of some crewmembers of the battlecruiser PNS Tepes and was able to hack Tepes' computer and orchestrate a "prison break" which resulted in the Manticorans' escape and the complete destruction of the Tepes. (HH7)

Harkness then made it to the surface of Hades with the rest of the escapees and helped Harrington in her campaign to overthrow the StateSec forces guarding the planetary prison. (HH8)

After the survivors had safely returned to Manticore, Harkness was rewarded with promotion to Chief Warrant Officer as well as the Parliamentary Medal of Valor and a knighthood. His actions aboard Tepes were widely publicized, making him a public hero. The Bureau of Personnel, as well as the Judge Advocate General took note of the computer skills Harkness displayed during the escape from Tepes and upon reexamination of their records, discovered certain "irregularities" in files pertaining to the Warrant Officer. While no official action was taken, Harkness was told, in no uncertain terms, to be on his best behavior from then on. (HH9)

He was then assigned to the LAC wing of HMS Hydra. Later, in HMS Werewolf, he served as senior LAC flight engineer even though the position actually called for a Lieutenant Commander. (HH9, HH10)

In 1920 PD, he served as the engineer aboard HMLAC Dacoit, Tremaine's command LAC in CLAC Squadron 3. (HH11)