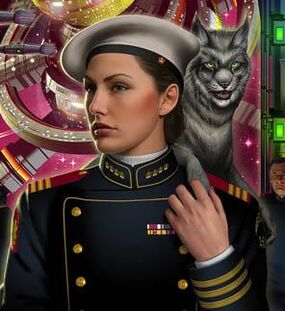 Honor was 188 centimeters tall, with strong-boned face, slightly almond shaped brown eyes, which she inherited from her mother, brown hair, and a pale complexion. She was tall for a woman, by Manticoran standards, and slender. Early in her naval career, she wore her hair quite short, but after living on Grayson for some years as her Steading developed, she let it grow quite long. She was a third-generation prolong recipient, and has retained an apparent age of early to mid 20's (pre-prolong) into her 60's and beyond. (HH8, HH1)

She had increased metabolic efficiency and enhanced muscle development due to the Meyerdahl beta genetic modification passed down from her 1st Wave (Meyerdahl) ancestors, thus was well able to adapt to Sphinx's heavy gravity. The cost of the higher metabolism was a need for more energy than humans without such enhancement, requiring (or enabling) consumption of large meals and desserts without gaining weight - but conversely, was also more prone to starvation effects if on reduced diets. Medically, she was one of the small minority of humans for whom regeneration therapy did not work. (HH9)

Honor Stephanie Harrington was born on October 1, 1859 PD, or 256 AL, at Craggy Hollow, County Duvalier, in the Duchy of Shadow Vale on the planet Sphinx to two physicians, Dr. Alfred Harrington and Dr. Allison Chou Harrington. During her youth, she was adopted by a treecat she named Nimitz. (UHH, HH1, HHA6: TBLP)

As a young adult, she was admitted to the Royal Manticoran Naval Academy on Saganami Island, and earned an officer's commission in the late 1870s PD. Following her Midshipman cruise aboard the heavy cruiser HMS War Maiden, she went through a number of positions aboard RMN vessels and rose in rank, eventually being given command of a light attack craft in 1886 PD, a destroyer, HMS Hawkwing (unknown to 1900 PD) and a hyper-capable starship, the light cruiser HMS Fearless, in 1900 PD. After being sent off to Basilisk Station, she and her crew were able to uncover a Havenite conspiracy to take over the system, and destroy a Havenite Q-ship. (HH1, OBS)

Two years later, Harrington, now in command of the new Fearless, a heavy cruiser, was sent to the Yeltsin's Star System to assist her mentor, Admiral Raoul Courvosier, in his deliberations with the Protectorate of Grayson. The Manticorans soon became involved in the Grayson's struggle with the neighboring Masadans, who were secretly supported by Haven. In the end, Harrington and her crew were able to prevent a Masadan ship from bombarding Grayson, and Harrington, who had previously been treated with little respect on Grayson due to her gender, was made a Steadholder, the first female noble and land-owner in the planet's history. To match her new status as Steadholder Harrington, Queen Elizabeth III of Manticore created her Countess Harrington as well. (HH2)

She was able to recover from her wounds through reconstructive surgery and therapy through the efforts of her father. Though it would take over a year for her to recover. Harrington took command of a new battlecruiser, HMS Nike, in 282 AL, with Michelle Henke as her first officer. Nike was assigned as flagship for Rear Admiral Sarnow, commander of Battlecruiser Squadron 5 in Vice Admiral Park's Task Force Hancock. Captain Paul Tankersley of the local shipyard supervised some repairs. He and Harrington became sparring partners, and, after a few weeks, lovers as well.

After receiving a war warning from the Admiralty, Admiral Parks split up his forces, leaving Task Group Hancock 001 under Sarnow to defend Hancock. They soon found themselves forced to defend Hancock Station from a vastly superior Havenite armada. With the help of Harrington's unorthodox tactics, the task force was able to hold off the Havenites long enough for reinforcements to arrive. However, Sarnow was incapacitated, leaving Harrington in command. Captain Pavel Young's cowardice cost many lives when he disobeyed orders and fled the defensive formation protecting the wounded Nike. Harrington managed to keep the rest of the formation together despite this, until she ordered them to scatter for safety when the pursuing force could no longer escape the Manticoran reinforcements. (HH3)

Despite the Queen's strong support for her actions, many aristocrats saw Young's following court martial as a vindictive attack on Young. They were not satisfied when he was removed from the Navy but acquitted on the capital charges, and opposed a declaration of war against Haven which the Queen and the Admiralty desperately wanted. To allow political feelings to calm, Harrington took an extended leave on Grayson. Once there, Harrington was formally admitted to the Conclave of Steadholders. When Adam Gerrick presented his proposal to build protective domes of crystoplast to cover cities and farms, she liked the idea and invested some of her personal fortune. Soon afterward, Michelle Henke arrived bearing the news that Denver Summervale had killed Paul Tankersley in a duel. She brought a devastated Harrington and her dozen armsmen back to Manticore. On a tip from Admiral Sarnow, Tomas Ramirez found Summervale in a remote lodge on Gryphon, and learned that Pavel Young – now Earl North Hollow – had hired Summervale to kill both Tankersley and Harrington. Confronting Summervale publicly in a bar, Harrington goaded him to challenge her. Taking advantage of her opponent's overconfidence, she managed to kill him in the duel. Later, an assassination attempt on her was thwarted by Andrew LaFollet. A frightened Lord Young avoided contact until she accused him in the House of Lords. On the dueling grounds, Young cheated and fired early. Saved by LaFollet's warning, Honor ducked in time, and killed Young. In the political uproar that followed, she was removed from command of Nike and returned to Grayson. (HH4)

Honor preferred a hot cocoa over coffee. She did not like the taste of coffee, though she enjoyed its smell. (HH1) She would, also, enjoy a good steak. (HH2)

She did not like politicians, especially after the First Battle of Basilisk. She also detested favoritism, and attempted to be fair to all of her officers under her command.

Honor liked to work out in the ship's gym late at night because she preferred to turn up the gravity to a level she was familiar with from her homeworld of Sphinx. (HH2, HH11) She preferred to have a sparring partner available, as long as they could challenge her.

Honor owns a sailplane plaque that she brings with her. At Basilisk, it was damaged during the battle. She would bring it with her on the second Fearless and then on the Nike. (HH3)

Some of her mannerisms included biting the inside of her cheek and rubbing her nose when in deep thought.

From 1909 PD detached for temporary duty with the RMN (HH6)