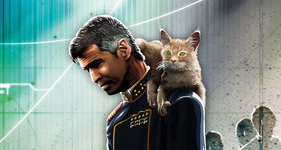 He is 189 centimeters tall.

Hamish Alexander was married to Emily Alexander and Honor Harrington, and had one younger brother, William. He was also an uncle of Lord Theodore Harper, Planetary Grand Duke of Manticore. (HH10)

He had a son, Raoul, with Honor, and a daughter, Katherine, with Emily. (HH11)

Alexander rose through the ranks quickly, of which he was proud that he did not use his noble status to his advantage. He was known to ignore "Going by The Book," when it was in his way, especially after the death of his father.[1]

In his youth, he was an avid soccer player, preferring tactics over the use of brute force even then. (HH3)

Alexander was born on the planet Manticore in 1820 PD/233AL as the eldest son of Murdoch Alexander, the 12th Earl White Haven, and his wife. He later chose to pursue a career in the Royal Navy. During his time at the Royal Manticoran Naval Academy on Saganami Island, he was under the tutelage of Lieutenant Raoul Courvosier, which developed into a lasting friendship during his Midshipman cruise. (HH2)

When Alexander was a Captain, Commander Craig Warner served under him. During that time, Alexander allowed Warner to go through with a duel. Later, he became the godfather of Warner's eldest son, Robert.

At some point early in his career, Alexander married his first wife Emily, a renowned holodrama actress, who was later paralyzed in a horrible aircar accident. (HH1, HH3)

At one time he served as Third Space Lord. (HH7)

Once promoted to Admiral's rank, Alexander led the school of traditionalist tactical thought against Admiral Sonja Hemphill's jeune ecole. In 1900 PD, he discussed Commander Honor Harrington's actions at in the Basilisk System with First Space Lord Sir James Webster in Landing. Afterwards, he went back to White Haven and conversed with his brother William about the situation, starting to brag about Harrington at meetings. (HH1)

In 1903 PD, after Commander Alice Truman of HMS Apollo sent an emergency message to the Admiralty, he met with Admiral Webster, who authorized him to take two ad hoc squadrons of battle cruisers to Yeltsin's Star. Commander Truman transferred to Alexander's flagship HMS Reliant in order to brief him. In order to get to Grayson as fast as possible, he ordered the fleet to high speeds. After relieving Captain Harrington's surviving unit, he led the invasion of Masada shortly afterwards.

In the aftermath of the battle, Alexander met with Captain Harrington and reprimanded her for striking Reginald Houseman, but also conveyed the gratitude of Queen Elizabeth III. He was present when Harrington was knighted by Ambassador Anthony Langtry and received the Star of Grayson and Steadholdership from Protector Benjamin IX along with a Manticoran Earldom. (HH2)

In 1905 PD, he recently completed a survey of Manticore's frontier stations' readiness state at the behest of Admiral Webster. He was invited to a meeting by the Duke of Cromarty, Allen Summervale.

Immediately before the outbreak of the First Havenite-Manticoran War, Alexander was serving as second-in-command of Manticore's Home Fleet. With the concurrence of Michael Mayhew, Admiral Caparelli decided to set a trap for the People's Republic of Haven by secretly sending heavy reinforcements to Yeltsin's Star System. Alexander commanded the reinforcement, thus superseding Sebastian D'Orville as Manticoran commander in the system. Haven's Admiral Amos Parnell fell for the trap, allowing Manticore to begin the war with the resounding victory of the Third Battle of Yeltsin's Star. (HH3)

After the First Battle of Hancock, he was named president of Captain Pavel Young's court martial. He then commanded Task Force 4, part of the Home Fleet, with HMS Queen Caitrin serving as his flagship.[2] After Paul Tankersley's death, he gave Honor Harrington the order not to challenge Earl North Hollow to a duel. After she defied the order and killed Young, he regretted having given an illegal order and that he knew would be ignored even if legal.

He led the primary thrust at the People's Republic of Haven after war was declared and was only stopped in the Nightingale System. He continued his drive on the Trevor's Star System and considered making a direct attack despite his reputation as a master of the indirect approach. He also managed to incorporate certain ideas of the jeune ecole despite his general distaste for it. (HH4, HH6)

In 1913 PD, White Haven was given command of the Manticoran Alliance's Eighth Fleet, to be activated in the Yeltsin's Star System with GNS Benjamin the Great as his flagship. While being chastised by Honor Harrington for narrow thinking, he had a brief realization of how attracted he was to her, an emotion that came through to her through her link with Nimitz. As a result, when she was captured, he felt guilty that he may have driven her off Grayson. (HH7)

By the time of her funeral, he was sure he was the reason for her departure. When word of a Havenite attack on the Basilisk System was received, he ordered Eighth Fleet to re-deploy from Trevor's Star to Basilisk via the Manticore Wormhole Junction, and arrived just in time to prevent further damage and to inflict severe casualties on the attackers. (HH8)

When Honor Harrington returned to Trevor's Star with the Elysian Space Navy, White Haven was glad she was wearing the uniform of a Grayson Admiral so he could greet her as an equal. (HH9)

Because of the mutual hatred between him and Sir Edward Janacek, White Haven is placed on half-pay after the death of Prime Minister Cromarty and the rise of the High Ridge government. He and Honor Harrington finally realized they loved each other, but did nothing about it out of their mutual love and respect for Lady Emily. The High Ridge government, in an attempt to neutralize their influence, started rumors that they were lovers, which were fuelled by the fact that Samantha, the mate of Harringon's treecat Nimitz, adopted White Haven.

Acting on intelligence that Harrington sent him directly, he traveled to Grayson to arrange for the Grayson Space Navy to reinforce Trevor's Star. Using the Manticoran Wormhole Junction on an emergency priority basis, they arrived in time to discourage Havenite Admiral Javier Giscard from attacking. Following the fall of the High Ridge government, White Haven became the new First Lord of the Admiralty. Meanwhile, his wife, after extensive discussions with Samantha, gave her blessings to him and Harrington acting on their love for each other. (HH10)

In 1921 PD, White Haven, Lady Emily, and Honor Harrington were married and decided to have children. At the age of 101, he became the father of a son, Raoul, from Honor and a daughter, Katherine, from Emily. (HH11)