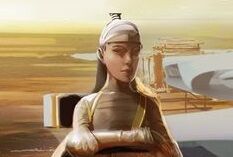 Matsuko was a small woman, only about 158 centimeters tall, and quite slender. She had a dark 'sandalwood' complexion, with brown eyes and black hair. Her eyes had a pronounced epicanthic fold. (HH1, SI1)

Dame Estelle had at least one sibling and at least two nieces, one of whom was a captain at BuShips. (SI1)

In 1897 PD, Dame Estelle was the Resident Commissioner for Planetary Affairs on Medusa. In order to help with her job and the Native Protection Agency, she was able to procure three Royal Manticoran Navy fleet pinnaces and two boarding shuttles, even though she disapproved of Captain Pavel Young, the senior officer of the RMN picket station.

She believed that the Medusans' native culture was inevitably doomed because of Manticore's presence, a belief shared by her predecessor, Baron Hightower. When Matsuko first started working as the Commissioner, she would send complaints of the RMN's senior officer to Manticore, but stopped after receiving no replies or changes were made.

In 1900 PD, Matsuko met with Commander Honor Harrington of HMS Fearless to discuss the current situation of Medusa. After Harrington's following the RMN's Medusa regulations, Matsuko sent numerous praises and thanks to Manticore. (HH1)

She sent a message of condolence to Honor Harrington after the death of Paul Tankersley, to Honor's surprise and gratification. (HH4)

For her loyal services in the Basilisk System, Dame Estelle was eventually made a Peer of the Realm: the newly created Barony of Medusa was bestowed upon her. (SI1)

She later became Home Secretary for the Grantville government when Queen Elizabeth III asked her to take over the Home Office. However, when the Talbott Cluster requested annexation by the Star Kingdom, she was reassigned there to become its Provisional Governor. (HH10, SI1)

In 1921 PD, with the creation of the Star Empire of Manticore, she became Queen Elizabeth III's Imperial Governor General for the Talbott Quadrant. In this capacity, she oversaw the escalation of the Manticoran conflict with the neighboring Solarian League in New Tuscany and Spindle. (SI2)

Though she initially disliked him, after the Battle of Monica she developed an excellent working relationship and warm personal friendship with Admiral Augustus Khumalo, station commander of the Talbott Quadrant. (HH14)

Though noted for being composed and genteel, Dame Estelle could nevertheless be pushed to her breaking point, whereupon she would lose her temper explosively in private. Honor Harrington once described Matsuko's account of her conversation with Countess New Kiev's courier as "sulfurous". (HH1)

Conscientious about her duties and responsibilities, Dame Estelle detested Lord Pavel Young and his comrades in the Navy, who were by and large utterly selfish, lazy, and incompetent. As a result, she distrusted Navy officers, to the point that when Commander Honor Harrington arrived in Basilisk, Dame Estelle addressed her as "Honor" rather than "Commander"; Harrington suspected that this was unintentionally done to distance her from the other naval officers who had so frustrated the resident commissioner. However, Harrington noted that while she might have her prejudices, she was not the sort to leap to conclusions.

Dame Estelle also cared deeply for the men and women of the NPA under her command; when an NPA raiding party was ambushed, she visited the survivors regularly at the Government House hospital and took their casualties hard, and the thought that the betrayal could have come from inside her own agency was very painful for her.

Dame Estelle was so overjoyed when HMS Fearless began assisting her and the NPA with their customs inspections that, when ordered to stop by Countess New Kiev, she sent a blistering letter back to Manticore stating that she would aid Harrington's endeavors to the very best of her ability, and if the Government was displeased, she would be happy to submit her resignation. (HH1)

As the Imperial Governor of the Talbott Quadrant, the by then Baroness Medusa was noted for her diplomatic skill and self-control. Hago Shavarshyan of the Solarian Frontier Fleet, without ever speaking to her, noted that her self-control only made her more dangerous, and decided that she was "not a woman to take lightly". (SI1, HH12)

Retrieved from "https://honorverse.fandom.com/wiki/Estelle_Matsuko?oldid=68867"
Community content is available under CC-BY-SA unless otherwise noted.