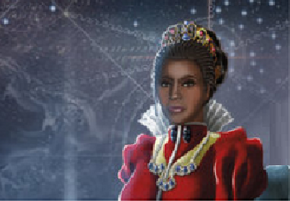 Elizabeth was the daughter of King Roger III of the House of Winton and Queen Consort Angelique. She had one younger brother, Michael. (HH8)

She was a niece of Edward Henke, Earl of Gold Peak, and Duchess Caitrin Winton-Henke, her father's younger sister. This also made her a first cousin of Calvin and Michelle Henke. (HH2, HH9)

She was married to Prince Consort Justin Zyrr-Winton, with whom she had two children, Crown Prince Roger and Princess Joanna. (HH9)

Elizabeth was born on Manticore in the year 1865 PD (or 260 AL), at the time when the Basilisk Terminus of the Manticore Wormhole Junction was discovered. After the annexation of the system, she was created the first Grand Duchess of Basilisk.

She was one of the rare childhood treecat adoptees, when she was adopted by her treecat Ariel at the age of fifteen in 1880 PD. Her father was killed by agents of the People's Republic of Haven, causing her to inherit the throne at the age of eighteen. She immediately neutralized the conspirators while preventing any word of the true cause of King Roger's death from leaking, which would have caused an immediate war Manticore could not hope to win. (HHA2.3: QG)

Upon taking the throne, she threw her support behind accelerating the military buildup her father started, as well as building a system of allies that could give the SKM the strategic depth to face the PRH. In the following years, she gave birth to two children, thus securing the line of succession.

In 1903 PD, Queen Elizabeth was willing to go far to find allies, especially with the Protectorate of Grayson, she had the government send loans, equipment, and personnel to bolster that system's defenses and industrial base. She found staunch domestic allies in Prime Minister Summervale, head of the Centrist Party, and the Crown Loyalists. The support of the House of Commons and tenuous control of the House of Lords allowed her to conduct a frantic campaign to prepare for war.

In the aftermath of the Second Battle of Yeltsin's Star, Queen Elizabeth extended her gratitude and thanks to Captain Honor Harrington by having her admitted to the Order of King Roger as a Knight Companion. (HH2)

Her reign in the early 20th Century PD was dominated by the First Havenite-Manticoran War; she relentlessly prosecuted a war against the People's Republic after the failure of their sneak attacks, only to be prevented from utterly smashing the People's Republic by domestic political turmoil masterminded by Oscar Saint-Just. (HH9)

In the cease-fire following the first war, she distrusted the reformed Republic on principle, seeing it as the same star nation that murdered her father, uncle, and Prime Minister. She utterly despised the coalition government in power during the cease-fire, which was mainly motivated by self-interest, desire for political power, and fear of the alliance between the Crown and the Commons. With the end of the cease-fire in Operation Thunderbolt, the Centrists were returned to power, and she began another war against Haven, this time with far stronger domestic support. (HH10)

In the Second Havenite-Manticoran War, Queen Elizabeth III remained convinced that the government of Haven was just like the Legislaturists or the Committee. She desired nothing less than the total destruction of Haven as an interstellar power, to ensure that it could not attack the Star Kingdom again. However, she was willing to hold peace talks, but these were spoiled when Queen Berry of Torch and Ambassador James Webster became targets of assassination plots the Queen believed to have been planned by Haven. She ordered the Navy to launch Operation Sanskrit, which caused the death of Admiral Javier Giscard. As a result, Havenite President Eloise Pritchart and Secretary of War Thomas Theisman saw no other choice but to execute Operation Beatrice, a direct attack on the Manticore System, which led to the Battle of Manticore. (HH11)

With the formation of the Star Empire of Manticore, she became Empress Elizabeth I, and the number of her subjects multiplied with the annexation of the Talbott Quadrant and parts of the Silesian Confederacy. She thoroughly supported the Royal Manticoran Navy's actions in fighting back the Solarian League Navy in the Quadrant. (SI2)

After the Manticore System came under attack by the Mesan Alignment Navy, and millions of Manticoran citizens were killed, Elizabeth made it clear that she would not allow the Star Empire to fall. When First Space Lord Thomas Caparelli sent her a letter in which he assumed full responsibility for the RMN's inability to prevent the attack, and offered his resignation, she sent it back unopened. Some time later, President Pritchart arrived in the Manticore System with proof in the form of Herlander Simões that the Mesan Alignment was in fact behind the events leading to the renewed conflict, and may in fact have been behind the very rise to power of the Legislaturalists. At this point Elizabeth decided to overcome her hatred of all things Havenite, and formed a military alliance with Pritchart in order to fight back Mesa and its pawns in the Solarian League. (HH12)

Even upon her succession to the throne at age eighteen, Elizabeth was highly astute, and willing to engage in political manipulation to achieve her aims. When she was made aware that her original choice of Regent (her Aunt Caitrin) was likely to face undue opposition, she took actions to circumvent this issue. (HHA2.3: QG) Another example of her deftness in this regard occurred when the Queen chose to create the Duchy of Harrington. Aware that Honor Harrington would virulently oppose her, she first attempted to confer the Parliamentary Medal of Valor on her, an honor that she knew Harrington was even less amenable to. After Honor convinced her not to do so, Elizabeth instead established her as Duchess, overriding her objections. (HH9)

Elizabeth was known to hate the People's Republic of Haven to the extent that she opposed Haven in nearly everything. (HH1) While she had excellent reasons for doing so, her hatred was not entirely rational, and she was incapable of considering Haven in an objective manner. Sadly, this hatred played into the hands of the Mesan Alignment; by assassinating several Manticoran politicians Mesa was able to ensure that Elizabeth refused to consider a peace treaty.

Elizabeth was utterly loyal to her friends, devoted to her subjects, and determined to do what she considered to be right. However, she possessed an impressive ability to hold a grudge against those who harmed or neglected her family, friends, or subjects. Her grudge holding abilities has been described by Honor Harrington. "Holding a grudge so long that it dies of old age, whereupon she takes it to a taxidermist and has it mounted." (HH4)

Stunned by the revelation of the existence of the Alignment and its ongoing manipulation of the two star nations, Elizabeth proved that her inherent integrity could overcome even her ability to hold a grudge, and when President Pritchart arrived in Manticore, she finally accepted that Pritchart's reborn Republic was a far different nation to the People's Republic she had hated for so long. As the two women worked together to form the Grand Alliance, they also became very close friends, which both surprised and pleased Elizabeth. (HH12, HH13)