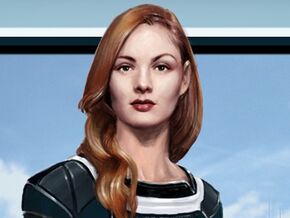 Elaine Komandorski, better known as Georgia Sakristos and later as Lady Georgia Young, Countess North Hollow[1], was a former Mesan genetic slave and an important figure in Manticoran politics of the 1910s PD.

She was bred as a C-line by Manpower Inc. slavers, but earned her freedom and her initial financial stake by selling out an entire freighter of escaped slaves for 500,000 Solarian credits. Her new identity as Elaine Komandorski was created in the Maya Sector of the Solarian League. Once in the Star Kingdom of Manticore, she conducted industrial espionage and blackmail, and to avoid police interest, changed her identity again to Georgia Sakristos before going to work for Dimitri Young; she was involved in the murder of a Landing City Police officer. (CS1, HH10)

She then became the Earl of North Hollow's "security consultant", though she actually worked as the "keeper" of the North Hollow files with which the Earls of North Hollow blackmailed a great many people. She was a beautiful woman who had enhanced herself with extensive cosmetic surgery. Dimitri Young promised to remove her files from the collection, but his quick and premature death[2] prevented this. She despised Dimitri's son Pavel, the 11th Earl, but with the information in the North Hollow files, he was able to keep her as the "security consultant" for the Youngs. The fact that he also used them to force her into sexual games she found sickening made her hate him even more; it was she who placed an anonymous phone call which led to exposing his role in Paul Tankersley's death at the hands of a professional duelist. She passed on the location of that duelist, Denver Summervale. (HH4)

After Pavel's death, she married his brother Stefan, becoming Lady Georgia Young. In 1920 PD, Anton Zilwicki was able to find information on her background on the planet Smoking Frog. (CS1) He and the former Countess of the Tor, Catherine Montaigne, gave her a seventy-two hour head start before informing the local police, and perhaps the Audubon Ballroom, of her identity. As instructed, she arranged for the complete destruction of the North Hollow files and left the Star Kingdom forever. She blew up the North Hollows' mansion (making it look like an Aircar fuel accident) along with the files. (HH10)