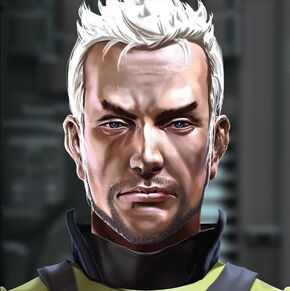 The Honorable Denver Summervale was a Manticoran citizen and a former Captain in the Royal Manticoran Marine Corps.

He was a cousin of Allen Summervale, Duke of Cromarty and Prime Minister of the Star Kingdom of Manticore.[1] (HH1)

Around 1875 PD, Summervale held the rank of Captain, and had accumulated debt. A secret sponsor paid him to lure an aristocrat named Scott into a duel, in which he killed him. He was paid enough for this action to clear his debts, but got such a thrill from it that he chose to do it again. Some time after killing another man, Bullard, he was paid by the enemies of Lieutenant Thurston's family to challenge and kill him. After he did, he was dishonorably discharged from the Marine Corps, and became a hired duelist.

In 1900 PD, he was involved in the mekoha trade on Medusa. He introduced a new more potent mekoha to the Medusans and built a drug laboratory on the planet as part of the Havenite Operation Odysseus. He evacuated the drug lab before the Native Protection Agency's impending raid, destroyed the lab to kill the raid force, and booked passage on a Silesian freighter off Medusa. (HH1)

Summervale was hired in 1905 PD by Pavel Young, Earl of North Hollow, to confront, goad, and challenge both Paul Tankersley and then Honor Harrington to a duel. He killed Tankersley, although he was wounded, and retreated to a remote hunting chalet on Gryphon to recover and hide until Harrington returned from Grayson. Acting under information from Young's security chief, Elaine Komandorski, several of Harrington's companions staged a Royal Manticoran Marine Corps training exercise on Gryphon, during which one pinnace "accidentally" got lost in a blizzard, landing next to Summervale's chalet. Under extreme duress, he admitted that he had been hired by the Earl.

Denver Summervale was killed by Honor Harrington[2] on the field of honor after Honor had accepted his challenge to a duel. Unknown to him, Harrington was an expert in the use of chemical-powered fire arms. While he was sill raising his pistol to aim, she critically wounded him in the abdomen with a shot from the hip. The wound left him unable to retaliate before her follow-up shot hit him directly between the eyes and burst his skull. (HH4)