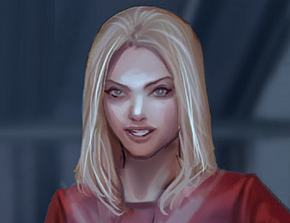 Cordelia Ransom[1] was a Havenite citizen and the Committee of Public Safety's lead propagandist with the title of Secretary for Public Information.

Ransom was a petite, golden-haired woman who made very little use of makeup. (HH3)

A citizen of the People's Republic of Haven, Ransom was a prominent member of the radical Citizens' Rights Union, which resorted to acts of terrorism in their defense of the right to the high state-supported standard of living.

Together with Robert Pierre and Oscar Saint-Just, she led the coup against the Legislaturalist regime, and became a senior member of the newly installed Committee of Public Safety. She provided specially selected action teams from the Citizens' Rights Union to eliminate Internal Security chief Constance Palmer-Levy. Her official position was Secretary for Public Information, which gave her control of the People's Republic's media and extensive propaganda apparatus. (HH3)

In 1911 PD, Ransom wanted to use the capture of Manticoran naval hero Honor Harrington as a propaganda weapon and personally took Harrington to her scheduled execution on the prison planet Hades. However, Ransom was killed when the battlecruiser Tepes was destroyed by Horace Harkness. (HH7, OBS)

Following her death, her faction was quietly purged. She was replaced as Secretary of Public Information by Leonard Boardman, who, while a skilled propagandist, utterly lacked her personal charisma and was entirely subordinate to Pierre and Saint-Just. (HH8)

Ransom was considered a very skillful propagandist, but the more level-headed Rob S. Pierre and Saint-Just noted that she had extremely radical opinions about politics and economics. As Admiral Thomas Theisman noted, she actually seemed to believe her own propaganda lies. Unlike Pierre and Saint-Just, she took personal satisfaction in destroying enemies, real or perceived, in the most thorough and terrifying manner possible.

In addition, she possessed an entirely irrational hatred and fear of the military; not the reasoned and entirely justified fear of Pierre and Saint-Just, who knew full well that the Committee had earned the military's hatred, but a deep, ideological loathing she displayed in her eagerness to crush even the slightest hint of independence. (HH7)