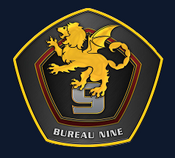 BuNine (short for Bureau Nine) is a group of dedicated consultants from various backgrounds who contribute to the Honor Harrington universe, serving as David Weber's technical support team with expertise in a number of fields.

BuNine got started in a group of science fiction fans around Tom Pope and Ken Burnside, designers of  Ad Astra Games's Saganami Island Tactical Simulator. Over time, the group became a more formal organization. When a movie developer needed help conceptualizing the bridge of an Honorverse starship, the group adopted its current name and started having annual meetings. Then, for the 20th anniversary of the first novel, On Basilisk Station, David Weber suggested BuNine to create the companion book House of Steel, forcing them to actually become a legal entity, BuNine Consulting, Inc.

About half of BuNine's members are somehow connected to the US military, mostly the Navy. Others include artists, lawyers, computer specialists, and the like, all accomplished experts in their respective fields.

Retrieved from "https://honorverse.fandom.com/wiki/BuNine?oldid=70259"
Community content is available under CC-BY-SA unless otherwise noted.