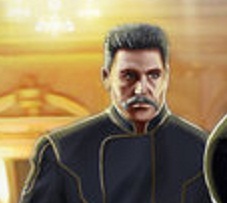 Anton Zilwicki was a Manticoran citizen and an officer in the Royal Manticoran Navy's construction and intelligence departments.

Zilwicki was rather short and stocky; his shoulders were so wide he almost seemed deformed to some people. He used to grow a neat mustache in his square face. (HHA3.3: FtH)

Zilwicki was born in the Gryphon Highlands on the planet Gryphon. He won the gold medal three times running in the Graeco-Roman wrestling events of the Manticoran Games. (HHA3.3: FtH)

Zilwicki was married to Captain Helen Zilwicki, a fellow RMN officer and commanding officer of a starship. They had one daughter whose name was also Helen. His wife died defending a convoy which carried hundreds of civilians, including her husband and daughter, against Havenite raiders. (HH3)

His specialty was technical evaluation and his background was naval construction. He was a “yard dog” until his wife was killed in battle, at which point he transferred into the Office of Naval Intelligence. He wanted to do something that would strike the People’s Republic directly, but was never good enough at naval tactics to have much hope of climbing to a fleet command position.

Zilwicki was stationed on Earth. During the struggle to rescue his kidnapped daughter, he met Lady Catherine Montaigne, Countess of the Tor. They instantly felt attraction for each other and later began a relationship. Together, they raised Berry and Lars, two homeless children Helen befriended while escaping from her abductors (See Manpower Incident). (HHA3.3: FtH, CS1)

It was he who later talked Lady Catherine into renouncing her noble title in favor of her younger brother in order to seek a seat in the House of Commons. (HH10)

In 1919, Anton and his adopted daughter Berry accompanied Princess Ruth, a niece of Queen Elizabeth III, to Erewhon for the memorial service of Hieronymus Stein. A Mesan/Masadan kidnapping attempt and the clashing of the interests of several star nations eventually led to Berry's coronation as Queen of Torch. Anton later travelled to the planet Smoking Frog where he recovered evidence of Elaine Komandorski's true identity (CS1) which he and Catherine later used to force Komandorski to destroy the North Hollow files and leave the Star Kingdom. (HH11)

Later, Anton and Havenite agent Victor Cachat travelled to Mesa where they organized the extraction of a Mesan defector, Dr. Herlander Simões. Anton was thought by the Mesan Alignment to have died in the explosion at Buenaventura Tower. (CS2)

Dr. Simões was a highly placed scientist who had worked on various Mesan projects. With his help they were able to convince Havenite President Eloise Pritchart and Manticore's Queen Elizabeth III that Mesa was their true enemy and the force behind many of the tragedies that had befallen their star nations in the past. (HH12)