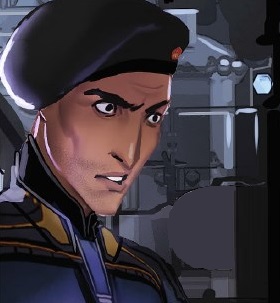 Andreas "Andy" Venizelos was a Manticoran citizen and an officer of the Royal Manticoran Navy.

In 1900 PD, Venizelos held the rank of Lieutenant and served as tactical officer aboard the light cruiser HMS Fearless. Once the ship arrived on Basilisk Station, he was assigned to take thirty-five enlisted crewmembers and a junior officer with him to form the inspection party assigned to Basilisk Traffic Control. Venizelos also took both of Fearless' pinnaces with him; his work on the station won him praises from Captain Michael Reynaud, commanding officer of the station.

He was awarded the two medals for his part at the First Battle of Basilisk, the Order of Gallantry, and the Monarch's Thanks Medal.

During the beginning of the Battle of Blackbird, Venizelos attempted to calm the nerves of the room with humor; in the aftermath of the battle, he attempted to get Captain Harrington to rest, and approved the actions of Fritz Montoya and James MacGuiness when they slipped a mickey into Harrington's cocoa to help her rest for the first time in fifty-three hours.

Venizelos notified Harrington of MNS Thunder of God's arrival in the Yeltsin's Star System, and got the ship ready for battle. During the Second Battle of Yeltsin's Star, he took Lieutenant Harris, the Assistant Tactical Officer, to the auxiliary fire control room to make sure that the missiles and the targeting system would be able to fire on Thunder of God when it came into range. (HH2)

After being promoted to Commander, he was put in command of the light cruiser HMS Apollo. (HH4)

He was later Commodore Harrington's chief of staff, being aboard HMS Prince Adrian when she surrendered to the People's Navy. He was killed while covering Harrington's escape from PNS Tepes. (HH7)

Venizelos was considered short by Manticore standards. He was called "Andy" by his friends and colleagues. He was among the people whose love Honor Harrington could feel through her telepathic link to Nimitz.

Andreas Venizelos Academy, a private school for children of Manticoran and Grayson war dead, was named in his honor. (HH10)