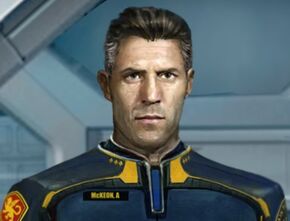 Alistair McKeon was a Manticoran citizen and an officer of the Royal Manticoran Navy. He served as Honor Harrington's deputy during several of her deployments.

McKeon was born on Manticore in 1852 PD, or 251 AL. He joined the Royal Manticoran Navy in the second half of the 19th Century PD, earning an officer's commission. Sometime before 1899 PD, he served under Harold Styles. (HH7)

In 1899 PD, McKeon served under Captain Rath aboard HMS Fearless. In 1900 PD, he held the rank of Lieutenant Commander and oversaw most of the ship's refit until Commander Honor Harrington took command. McKeon helped Rafael Cardones with his mix-up of programs for the recon drones.

In 1901 PD, he was promoted to Commander and given command of the destroyer HMS Troubadour. He was sent back to Basilisk as part of a larger RMN force. (HH1, OBS)

McKeon was awarded the two medals for his part at the First Battle of Basilisk, the Order of Gallantry and the Monarch's Thanks.

In 1903 PD, McKeon and Troubadour were part of the escort force sent to Yeltsin's Star. He accompanied Fearless to the Casca System, believing in the mission to Grayson, but understanding Captain Harrington's concerns.

After the battle with the Masadan LACs, he felt responsible for the damage to his ship and the deaths among his crew. He accompanied Captain Harrington and Commander Truman on a visit to Grayson Command Central for a meeting with Admiral Leon Garret. McKeon briefed Grayson on the new recon drone technology, which he was considered an expert on the subject.

McKeon wanted to tour Blackbird Base, but he was needed on Troubadour to supervise the repair efforts in the aftermath of the Battle of Blackbird. He assigned Lieutenant Prescott Tremaine to be Captain Harrington's escort and pilot.

He led Troubadour into battle during the Second Battle of Yeltsin's Star. The Troubadour was destroyed in battle against the MNS Thunder of God, but Commander McKeon led a hundred of his crew to pinnaces and escaped. McKeon and the rest of the Troubadour survivors went back to Manticore on the Fearless. (HH2)

In 1904 PD, he was scheduled to be promoted to Captain (JG). (HH3) In 1908 PD, he commanded HMS Prince Adrian (HH4) and continued to serve in this position after being promoted to Captain (SG). He was the senior-ranking captain in Cruiser Squadron 18. While escorting convoy JNMTC-76, Honor Harrington revealed to him that he had been promoted to Commodore. Soon after, he was among those captured when Prince Adrian surrendered to the People's Navy. He suffered several broken and lost teeth when he was butt-stroked during the melee that erupted when Nimitz tried to kill Cordelia Ransom. He survived the escape and made it to the surface of the prison planet Hades. (HH7)

After the prisoner revolt led by Honor Harrington, he was president of the court that tried the surviving StateSec personnel. He commanded ENS Krashnark and then ENS Wallenstein in the Elysian Space Navy. (HH8)

After the return to the Star Kingdom, he was promoted to Rear Admiral and commanded a division in Eighth Fleet during Operation Buttercup. (HH8, HH9)

Admiral McKeon held his flag aboard the pod-laying superdreadnought HMS Intransigent in Eighth Fleet under Admiral Harrington. Although the ship survived, he died along with his entire flag bridge crew at the Battle of Manticore.[1] (HH11)

The Edward Saganami-C-class heavy cruiser HMS Alistair McKeon was named after him. (HH12)

Alistair McKeon was highly suspicious and jealous of Commander Harrington when she first took command of HMS Fearless. He had feelings that he would do better if he was in her position, resenting being passed over for the command. Despite his feelings, he did his job and was able to help Harrington succeed in her mission at Basilisk Station. In subsequent years, he and Honor became very close friends and often served together. (HH1, HH2) Shortly before his death, Alistair even became the godfather of Honor's son, Raoul. (HH11)

McKeon served with Dominica Santos for many years, and considered her a friend.

McKeon started to emulate Captain Harrington's mannerisms, which included touching his nose when he was thinking.