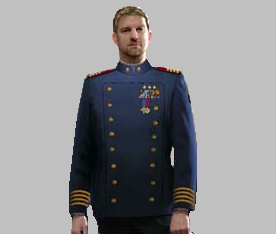 Sir Aivars Aleksovitch Terekhov, PMV, KCR, MC, was a Manticoran citizen and an officer of the Royal Manticoran Navy.

They had a daughter, Anastasia, who died in a climbing accident on Sphinx around 1906 PD. (SI4)

Kenneth Bashanova was a very distant cousin of his. (SI1)

Aivars Terekhov was born in the Star Kingdom of Manticore in the first half of the 19th Century PD; he originally pursued a career in the Royal Manticoran Navy, but was seconded to the Foreign Office for twenty eight T-years. He returned to active duty with the RMN after the Battle of Hancock and the outbreak of the war with Haven, and was assigned to command HMS Defiant, a light cruiser.

In 1915 PD, Defiant and its sister ships HMS Valiant and HMS Resolute were sent to the Hyacinth System to guard a convoy, which was attacked by Havenite forces. The following struggle became known as the Battle of Hyacinth, in which all Manticoran vessels except the freighters Handley and Plasma Stream were destroyed.

Terekhov himself had been so badly mangled by a fire on his ship's bridge that the Havenite doctors had to amputate his right arm and leg and regenerate them from scratch. After that, he spent almost a full T-year as a prisoner of war in the Republic of Haven until a general prisoner exchange was engineered by the High Ridge government. He later received the Manticore Cross for his conduct at Hyacinth. The battle caused lasting psychological trauma to Terekhov, which he would not fully recover from until the later Battle of Nuncio.

On 12 June 1920 PD, he was assigned to command the heavy cruiser HMS Hexapuma and directed to join the Manticoran squadron on duty in the Talbott Cluster. He and his crew patrolled the Cluster, ambushing and capturing several pirates, uncovering a conspiracy to sabotage the Constitutional Convention, and fighting the decisive Battle of Monica. (SI1)

Upon his ship's return to Manticore to complete repairs, Terekhov was promoted to Commodore and given command of Cruiser Squadron 94, which headed right back to the Spindle System a week after his arrival. After he arrived on Flax, Estelle Matsuko, Baroness Medusa and Governor General of the Talbott Quadrant, staged an award presentation, during which he was given the Parliamentary Medal of Valor and created a Knight Companion of the Order of King Roger. (SI2)

Immediately after, he formally took command of CruRon 94, carrying his flag aboard the heavy cruiser HMS Quentin Saint-James. He led the squadron into the Battle of Spindle in early 1922 PD. (HH12)

In July of the same year, he commanded a force of warships detached to the Mobius System, to keep Solarian League intervention battalions from further slaughtering the rebels fighting local dictator Svein Lombroso. Upon arriving in the system and realizing four SLN warships were carrying out large scale kinetic bombardments, he coldy told the senior Solarian officer to abandon and scuttle all his vessels within ten minutes, or be destroyed. After that ultimatum was obeyed, Terekhov made contact with the surviving rebels on the surface, as well as with Brigadier General Francisca Yucel, the senior Solarian officer present. When Yucel refused to surrender and threatened to execute a soccer stadium full of civilians, Terekhov had the government compound she was at destroyed with a kinetic strike. (SI3)

Retrieved from "https://honorverse.fandom.com/wiki/Aivars_Terekhov?oldid=82084"
Community content is available under CC-BY-SA unless otherwise noted.